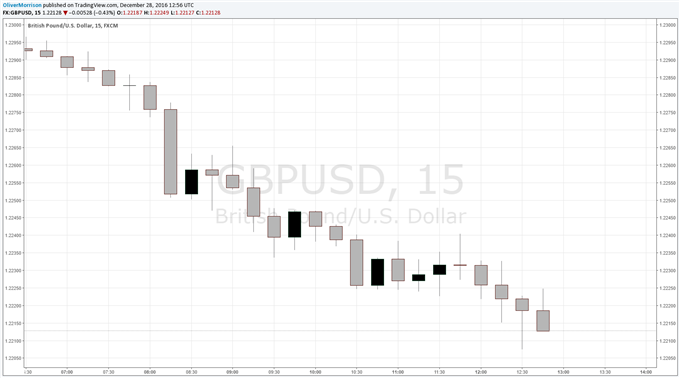 The British Pound is under pressure after an unexpected drop in UK mortgage approvals in November.

The British Bankers Association (BBA) reported Wednesday that the number of mortgage approvals fell to 40,659 in the month, down from 40,835 in October and against estimates of a rise to 41,400.

The BBA data follow from the Royal Institution of Chartered Surveyors, which has reported that buyer enquiries for houses rose for a third month running in November – although the increase was still relatively modest. Buyer enquiries had earlier fallen for six months running through to August.

Economists are now concerned that the UK housing market could struggle next year, with some predicting there will be house price drops in 2016.

It follows comments from the former governor of the Bank of England, Mervyn King, who at the beginning of the week suggested that the UK government is better off seeking a ‘hard Brexit’ option when it formerly launches the exit from the European Union next year, sparking fears amoung traders about the impact that would have on the UK’s economy and its currency.

However, the BBC reports that other pro-Brexit campaigners have asked business groups across the EU to push for Britain’s continued access to the single market, in order to help prevent disruption to trade.

The group called ‘Leave Means Leave’ has written to the chambers of commerce in all the other 27 EU states, asking them to call for a "sensible agreement regarding the terms of Britain's exit from the EU". It says trade barriers would have a "detrimental effect" and calls for uninterrupted trade as well as near-zero tariffs.