USD/MXN Dives as Banxico Challenges Fed with a 50bp Hike

- Banxico surprised the market and raised its key rate by 50bps to 5.75% versus a 25bps hike expected.

- USD/MXN halted its advance and dropped nearly 0.9% after the large hike

The Bank of Mexico followed in the Fed’s footsteps and hiked its overnight rate by 50bps to 5.75% at its last monetary policy meeting of 2016. The decision comes as a surprise as most market participants only anticipated to see a quarter-point rate increase.

The move aims to prevent capital flight after the U.S. Central Bank moved to further normalize policy yesterday, but most importantly it is a direct effort to protect the heavily battered domestic currency and to head off inflationary pressures before expectations become unanchored.

During 2016, several episodes of volatility and the unexpected outcome of the U.S. Presidential Elections prompted a massive sell-off in the Mexican Peso (surge in USD/MXN). This in turn heightened worries that the large-magnitude of the depreciation would feed into consumer price expectations. To respond, Banxico took aggressive measures to stop the bleeding in the peso and lifted borrowing costs by more than 200bps in the last 12-months. Despite the effort, the measures proved to be largely unsuccessful in reversing the MXN downtrend with the currency still down ~19% YTD against the USD.

In the policy statement, Banxico highlighted worries about pass-through pressures and underscored that the decision to tighten policy by half a percentage point aims to counteract inflationary forces at a time when there continues to be significant risks for more peso depreciation. As far as economic activity, the tone was somewhat downbeat noting that the balance of risks for the Mexican economy had deteriorated amid stagnant investment and uncertainty in trade ties between Mexico and the US. 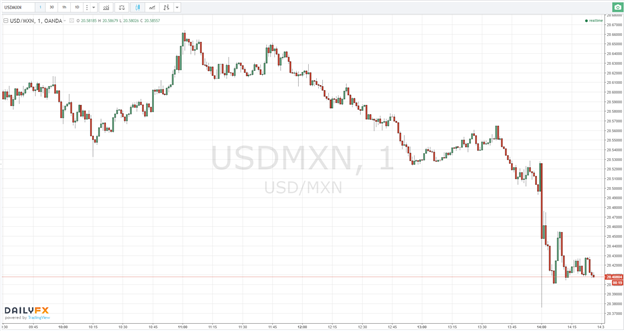 Following the surprise 50bps hike, the peso erased all intraday losses with the USD/MXN falling as low as 20.3749. At the time this report was written, MXN had consolidated gains strengthening 0.75% against the greenback amid bets that Banxico would dowhatever is necessary to stabilize the peso and prevent further losses.