- Bank of Mexico likely to take steps to stem Peso depreciation as they’ve done repeatedly over the past year.

The Bank of Mexico (Banxico) is set to follow the Federal Reserve and is expected to deliver another 25-bps interest rate increase later today, after the conclusion of its last policy meeting of 2016. As is typical, Banxico’s policy statement will be released at 14:00 EDT/18:00 GMT. At its last policy meeting in November, on the heels of the US Presidential election, Banxico hiked rates 50-bpsin order to prop up the Mexican Peso, as anticipated.

The Mexican Monetary Authority has proven to be one of the most aggressive emerging market central banks around the world, already having tightened rates by 225-bps in the last 12-months in order to prop up the domestic currency and furthermore, to prevent inflation expectations from becoming unanchored due to the peso depreciation to un-anchor inflation expectations.

Although the overall level of inflation remains contained within the 2%-4% target band set by the Central Bank, policy makers are growing increasingly worried that consumer prices will accelerate in 2017 and have warned that the “great achievement” of curbing inflation over a decade must not be sacrificed.

While there is unanimous consensus among market participants that Banxico will continue lifting borrowing costs, there is uncertainty about the magnitude of the upcoming rate hike. The majority of analysts surveyed by Bloomberg News favor a 25-bps raise while a smaller minority expects to see half-percentage-point increase in the overnight rate (like in November). We believe it is likely that the Mexican Central Bank will opt for the smaller hike in order to prevent consumption or investment from drying up, which will undermine overall economic activity at a time when fiscal policy has become more restrictive.Similarly, with USD/MXN having stabilized recently, there is less near-term pressure to protect Peso depreciation. 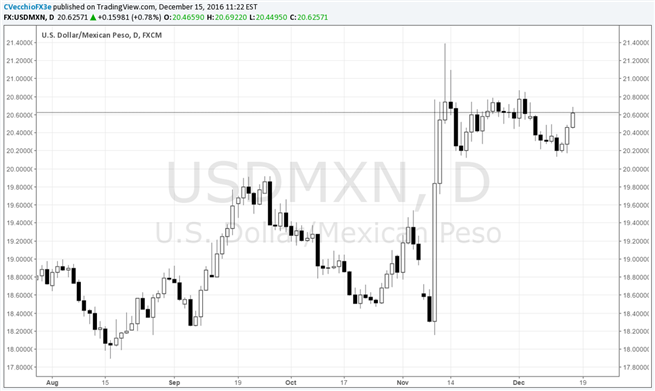 Against a backdrop of slowing domestic economic activity, uncertainty about trade relations with the US on promises that President-elect Trump would renegotiate NAFTA, and a slightly more aggressive path for Fed interest rate increases in the upcoming year, there are a number of obstacles in the way for the Mexican Peso to stage a significant turnaround in the short-term. It’s worth noting that USD/MXN has not set a new high since November 11, despite DXY Index moving to fresh 14-year highs today.