- EURUSD’s stability above 1.05 could continue for a while.

- See the DailyFX Economic Calendar and see what live coverage for key event risk impacting FX markets is scheduled for this week on the DailyFX Webinar Calendar.

The first indication of German economic conditions in December suggests that Europe’s largest economy is still performing well and that economic growth there could even be accelerating – a signal that the Euro could now at least hold its current levels for a while.

In the Euro-Zone as a whole, the ZEW Indicator of Economic Sentiment recorded a figure of 18.1 points, up from 15.8, while its Assessment of the Current Situation in the Euro-Zone rose to minus 8.3 points from minus 9.3.

“The ZEW Indicator of Economic Sentiment remains at the same level; however, given the fact that the evaluation of the current situation has once again recorded an improvement, the overall assessment is quite positive,” commented ZEW President Professor Achim Wambach.

“This is supported by the recently published positive GDP growth figures for the Euro area in the third quarter. The considerable economic risks arising from the tense situation in the Italian banking sector, as well as the political risks surrounding upcoming elections in Europe, seem to have faded into the background at the moment,”he added.

The ZEW, formally The Centre for European Economic Research, is one of Germany’s major economic research institutes and its monthly release is monitored closely in the financial markets as it is seen as a forward-looking report.

The latest data imply that EUR/USD’s current relative stability above 1.05 could continue for a while, helped by profit-taking in the Dollar ahead of this week’s key meeting of the US rate-setting Federal Open Market Committee, which is almost unanimously expected to raise US interest rates.

The recent strength in the DAX index of leading German stocks also suggests that, for now, concerns about the Euro-Zone economy are easing despite continuing worries about the Italian banking system. On Tuesday, Italy’s largest bank, UniCredit, unveiled plans to raise EUR13 billion in the nation’s biggest share issue to date, to shore up its balance sheet and distance itself from Italy’s broader banking crisis. 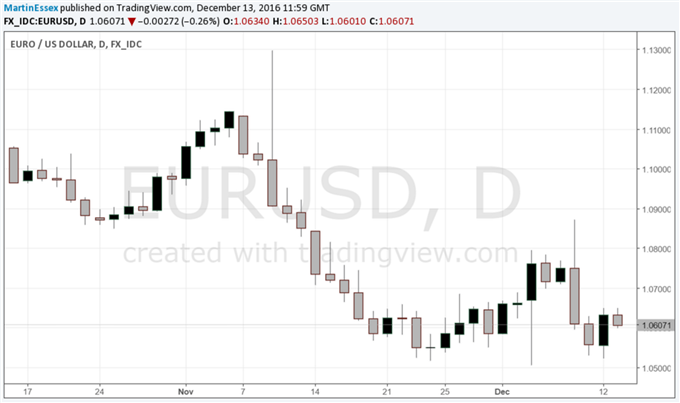