- Bank of England Governor Carney ready to serve 8-year term, according to FT.

The British Pound edged marginally higher in early trade Monday, after gapping open lower on Sunday, on reports that Bank of England Governor Mark Carney will not resign from his post, and is instead considering serving the full eight-year term. Speculation last week that the Governor may leave in 2018, after veiled criticism from UK Prime Minister Theresa May, pushed Sterling down close to its recent ‘flash crash’ low.

UK PM May provoked controversy in recent weeks when she said that the BOE’s loose monetary policy had "some bad side effects" on savers and pensioners. In response, Governor Carney made it clear that he would not take instructions from politicians on BOE policies.

The Governor has also been under pressure recently from senior political figures for being too negative after he warned that the UK would enter recession after the country voted to leave the European Union. In the first GDP figure since the Brexit vote, the UK economy grew by 0.5% in the third quarter beating analysts’ expectations (0.3%). Year-on-year, the economy expanded by 2.3%, again beating market expectations (2.1%). It was the fastest growth rate since the second quarter of 2015.

Governor Carney’s current contract runs until 2018 but he has an option to extend it to 2021, which would leave him as the central bank chief during the upcoming Brexit negotiations. As Currency Strategist Christopher Vecchio noted earlier, given Governor Carney’s international stature as a competent policymaker after guiding the Bank of Canada through the GFC, his departure from the BOE on the grounds of political interference would send the BOE and the Sterling into a full-fledged crisis. 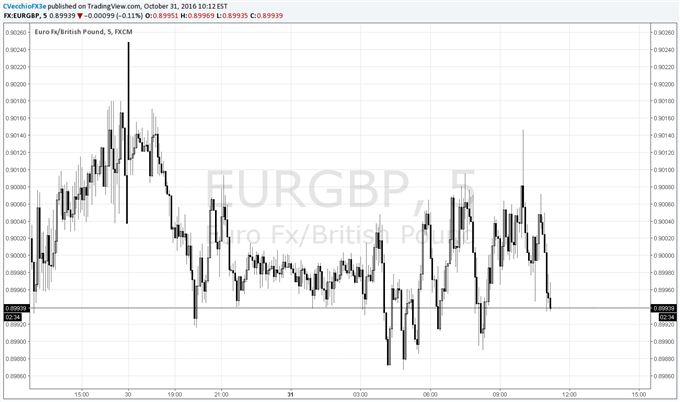 BOE Governor Carney’s next, scheduled, public appearance will take place this Thursday when the Monetary Policy Committee meets to decide the official interest rate, expected unchanged at 0.25%. The Governor will also deliver the Quarterly Inflation Report which sets out the detailed economic analysis and inflation projections that the MPC uses to make its interest rate decisions.

The MPC is expected to look through the recent upbeat GDP figures and warn that the outlook for the economy remains downbeat. The Governor is also expected to announce the latest CPI forecasts for 2017 and 2018, with the recent slump in sterling expected to push both numbers higher from 1.9% and 2.4% respectively.

This latest uptick in inflation expectations can be seen clearly in the 10-year UK Gilt yield which has risen from a post-Brexit low around 0.55% to a current multi-month high of 1.245%. All things being equal, when inflation rises, bond yields rise (prices fall). If the current rate of inflation is higher than the prevailing bond yield, investors holding these fixed income securities lose money.

In another boost for Sterling, a recent business barometer survey showed optimism in the UK economy continuing to improve. The Lloyds Bank survey showed overall business confidence in October rose to a post-EU referendum high, supported by improvements in both business prospects and economic optimism. This report chimes with the last PMI data that show September UK manufacturing and services both recovering from July’s EU referendum shock lows.

See the DailyFX Economic Calendar for UK economic data for the week of October 30 to November 4, 2016.