- Fed officials decided to wait in September but Chair Yellen did not manage to get a unanimous decision.

- Some officials cited worries of downside risks from abroad and several headwinds to inflation.

- The USDollar spiked higher and then reversed against most major pairs.

The Federal Open Market Committee (FOMC) Minutes for its September 20-21 meeting showed a split in the path for rate hikes ahead, with some calling for a hike at the September meeting.This meeting saw three dissents in regional presidents as Presidents Esther George of Kansas City, Cleveland’s Loretta Mester and Boston’s Eric Rosengren all dissented for a rate rise. While most officials did not vote for the rate rise, the murmur of conviction was starting to build within the group. According to the transcript several officials saw the need to raise rates relatively soon. It was generally noted among the group that a reasonable argument could be made to hike now or for waiting for some additional inflation and labor market information.

One of the key statements that drew attention during the September-December 2015 timeframe, preceding the December 2015 rate hike, was that “the risks to the outlook are nearly balanced.” The Minutes of the September 2016 meeting showed officials once more use the term, saying that a “substantial majority now viewed the near-term risks to the economic outlook as roughly balanced.” However, there was some discussion regarding the cost/benefit of undershooting inflation as many officials viewed slight labor market slack remaining.

The Fed has so far had to decipher quite the mixed picture in economic data. Despite a consistently strenghtening labor market via NFPs and the jobless rate, GDP has been signifcantly weaker than expected with US growth only 0.8% in Q1 and 1.4% in Q2. As of the latest update, GDP growth for Q3 is expected around 2.1, according to the Atlanta Fed’s GDPNow.

The Fed’s mandate exemplifies the real dilemma facing the Fed. The employment half of its mandate has continued to maintain growth despite a significant slowdown in May, with the last four Jobs Reports showing job growth of above 150k, significantly more than Fed officials say is needed for a steady labor force. On the other hand, the Fed’s preferred measure of inflation has continued to run below the Fed’s objective of 2% growth, since April 2012. Headline Personal Consumption Expenditure (PCE) growth stood at a cool 1.0% in the August update; and the core PCE is below target at 1.7% growth. 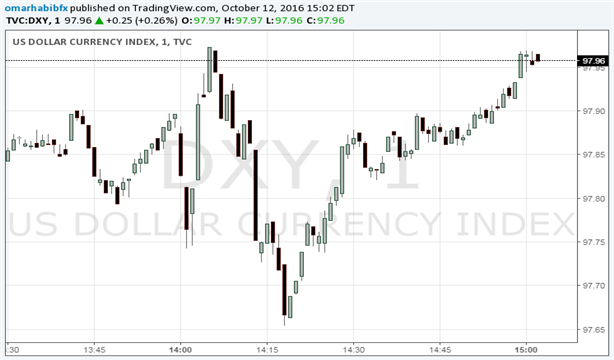 The USDollar rose against all major pairs in the immediate wake of the FOMC Minutes. However, it reversed and wiped away the gain. By the time this report was written, the USD rose again and was trending at highs.