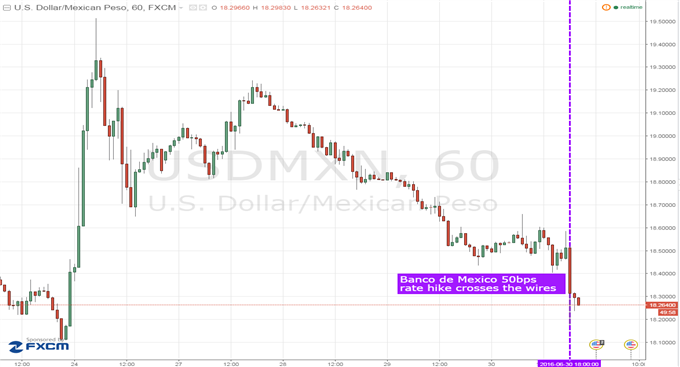 The Mexican Peso surged by two percent after the Banco de Mexico shocked speculators with a 50bps rate hike. This move extended the reversal from Peso record lows hit shortly after the “Brexit” vote. This change to key rates was more than the 25bps increase that had been expected by the markets and the surprise generated a strong reaction from the market. The Mexican Peso has declined significantly against the dollar in recent the past two months and fell even further as the news of the United Kingdom’s split with the European Union crossed the wires. With this newest tightening efforts, the peso has clawed back most of the losses following the “Brexit” vote.

Moving forward the Banco de Mexico will closely watch CPI, aspects affecting inflation and their monetary position relative to the United States. In its statement, Banxico said that they expect CPI to remain near target in 2017 but falling telecommunications and electric prices create downside risk to their goal. They remain confident that inflationary pressures are under control and that existing risks have deteriorated. In December of 2015, the central bank raised interest rates for the first time since 2008 and clearly stated that the increase was mainly a response to the absence of Fed rate adjustments. Further, in February, the group hiked rates and announced that it had intervened on behalf of their currency. As this further drastic move from the bank is digested, it will be pertinent to keep a close eye on Fed statements as well as watching out for any further, global central bank surprises near-term.