1. The Late Session Ramp was Back with Gusto: In yesterday’s piece, we noted how the late-session price action surges that have become commonplace on the Shanghai and Shenzhen Composites were noticeably over the past few days. Well, last night those themes came back with aggression. After spending much of the session treading water, Chinese stocks rocketed higher with an hour and twenty minutes left in the session. For the Shanghai Composite, this was a critical move as the index spent the entirety of the session trading around the 3,000 psychological level that we’ve been discussing as ‘line-in-the-sand’ support.

The Shanghai Composite (shcomp) closed with a +4.89% gain while the Shenzhen Composite (szcomp) put in a +6.52% incline. Only 12 stocks out of the over 1,100 issues on the index were down on the day. This strength led most markets throughout Asia higher, and gains have come into many European issues as well as American stock index futures ahead of the open.

With a pivotal Fed meeting on the calendar for tomorrow afternoon, be very careful towards chasing prices ahead of such a big release. The more anticipated a release is, the more likely that we’ll see noise ahead of the data; and some investors have been looking to this meeting for three years when the Fed began mentioning September 2015 as a target date for a rate hike.

It’s also likely that we’ll see traders attempting to position themselves ahead of big releases. This means they could sell out of long positions or buy to cover shorts so that they’re not carrying as much exposure into a ‘risky’ period in the market: This can create noisy signals that traders regret taking after-the-fact.

Remember that in trading, opportunities are infinite. Capital, most definitely, is not. It’s much better to miss out on an opportunity than to lose capital because there will be more opportunities tomorrow, and capital doesn’t just grow back on its own.

2. UK Wage Growth stokes hopes for inflation: After UK inflation printed flat yesterday (1% for Core Inflation), the Sterling sold off as rate-hike hopes were further diminished for the British economy; and this came after Ms. Kristin Forbes commentary on Friday that said that hikes in the UK would like come ‘sooner rather than later.’

But in a release this morning, UK Wage Growth printed a 2.9% gain that built back hopes for a rate hike early next year. The Sterling has put in an outsized rally since the release, with GBP/USD moving higher by ~100 pips while GBP/JPY has put in a ~180 pip gain.

The allure of such a situation is that in a world that’s seeing most economies embark on looser monetary policy, there are few currencies that look attractive to buy against expected weakness. The US Dollar was the sole outlier from July of 2014 leading into the second quarter of this year, as the tapering of QE and impending rate hikes led investors into buying the dollar. Hand-in-hand, we had weakness in GBP and EUR as this monetary policy dichotomy was expected to continue growing. GBP/USD went down by over 2,500 pips during this move, and EUR/USD was down by over 3,000 as investors sold Euro’s ahead of European QE in favor of US Dollar strength.

With all of the banter around lift-off, gradual rises, and ‘data dependency,’ the picture for the US and the Federal Reserve has become cloudier. If the UK can solidify economic strength in the coming months, this could highlight the attractiveness for long GBP against currencies that are expected to weaken on QE and looser monetary policy. 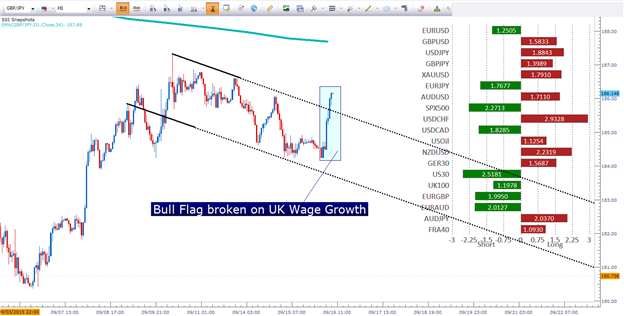 3. FOMC Strategy: Anyone around the financial world has been inundated with media around tomorrow’s Fed meeting, to the point where even critical prints such as this morning’s US CPI number or yesterday’s Advance Retail Sales have become marginalized while much of the world waits on the Fed.

This is as messy of a decision as I’ve ever seen; because in the past the data or markets have pretty much shown the Central Bank what they should do; with errors only becoming evident far after the fact. Like Greenspan hiking rates too slowly to offset ‘irrational exuberance’ seen in stocks during the Tech Boom (which quickly became the Tech Bust); or hiking rates too slowly to cool off the ‘housing boom’ that created an enormous bubble within the American economy. On the other side, the Fed has arguably been too slow to cut rates to offset the tech bust or the financial collapse, to the point where we had to have emergency Fed meetings to throw in 425 basis points (4.25%) worth of rate cuts in a year between December of 2007 and December of 2008.

The big difference is that this time, the Fed is leading the way. Nobody in the world knows how this will turn out. And even if you did know what Ms. Yellen was going to say tomorrow, there would be no way of predicting how exactly the market would price-in this information; making tomorrow’s Fed meeting a double entendre of risk. And while this may feel exciting or give an extra pulse of adrenaline in the morning, trading professionally isn’t about being excited. It’s about being professional.

So, if you don’t have a strategy that can manage your risk throughout the next couple of days, it’s highly recommended that you tread lightly. This is ‘the fast lane’ of finance, and while prices can put in big moves really fast, Traits of Successful Traders illustrates how most retail traders do worse in volatile conditions.

One of the best feelings in the world is being cash-heavy after a huge decline (such as 2008) so that you can swoop in and buy when prices are at rock-bottom support. Surely, this strategy won’t work out every time, as prices may ascend without your participation and you’re left sitting on your hands; but if given the option between being prudent or taking a loss, traders should always elect the route of least resistance.