1. Chinese stimulus continues with China’s devaluation of the Yuan: After the disappointing export numbers issued this weekend, the Chinese Central Bank was in a difficult spot: They could either continue to support a strong Yuan in order to keep the currency attractive to drive investment flows into the Chinese economy (at the expense of exports); or they could weaken the currency to assist export growth while risking foreign investment dollars.

The PBOC devalued the Yuan in the overnight session, triggering the biggest one-day loss in the currency in over 20 years. The last time that the Yuan moved this much was in 1994 when Beijing let the currency fall by 30%.

Chinese authorities combined this devaluation with a modification in how the trading band with USD will operate. China sets a midpoint for the value of the Yuan against USD, and allows the currency to move within 2% above or below this midpoint (known as the daily fixing). The PBOC has treated this very subjectively in the past; sometimes setting the fix so that the Yuan is stronger against USD a day after the market has indicated it should be weaker.

Moving forward – the daily fixing will be based on how the Yuan closes in the previous trading session.

Despite the actions, Chinese stocks traded stubbornly within a relatively tight range, with Shanghai closing down .01% and Shenzhen up .41%. 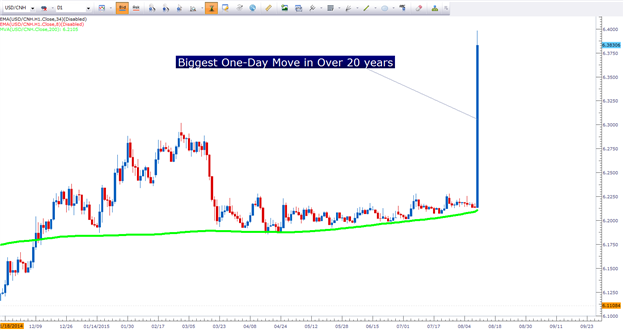 2. Aussie and Kiwi sell off on back of Yuan devaluation: Last week the Reserve Bank of Australia gave markets a surprise by not talking the currency lower. This was a big change of pace, and left many scratching their heads. The prevailing opinion at the time was that the RBA was satisfied to let market forces such as the Commodity sell-off or Chinese weakness to take over in driving the Aussie lower.

Last night was a great example of that. After the PBOC slammed the Yuan lower, the Aussie and Kiwi followed. AUDUSD is off ~90 pips and NZDUSD is off ~65 pips; with both pairs breaking below support and looking as though the down-trends are set to continue.

Both pairs have put in some attractive price action topping patters on the daily chart after posting dragonfly dojis yesterday. 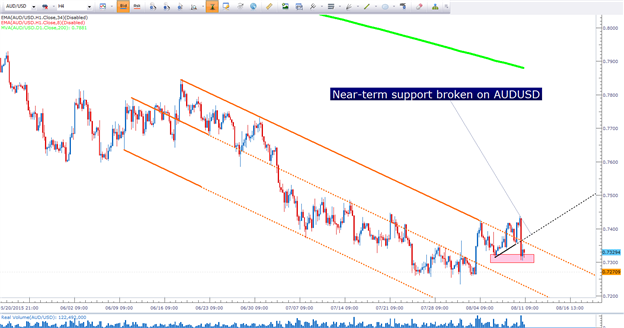 3. USD Range Continues, wait for support to buy or resistance to sell: Despite all the pandemonium around a September rate hike and lagging inflation and geopolitical concerns spread around the world, the US Dollar has been confined to a range-bound pattern for the past month with fairly well-defined support and resistance.

As the old saying goes, ‘trade what the chart gives you,’ and for right now the chart is giving us a US Dollar range. The best way to approach the situation is to find markets or avenues in which you want to get long USD – such as the Commodity Currencies like USDCAD, AUDUSD, or NZDUSD – and look to buy dollars after USD approaches the support zone of ~11,990. On the other hand, when USD reaches resistance look to sell dollars in pairs such as GBPUSD, as the UK is one of the few economies actually seeing some element of growth. 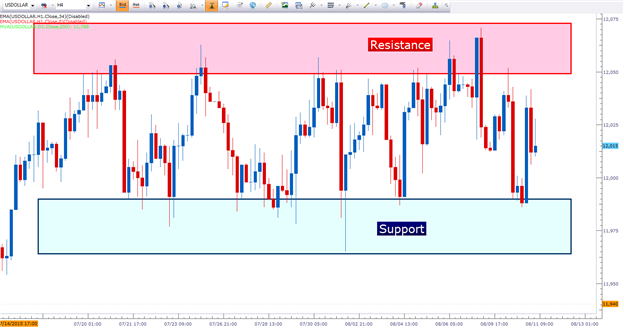 - Written by James Stanley of DailyFX; you can join his distribution list with this link, and you can converse with him over Twitter @JStanleyFX.