The Federal Reserve’s Vice Chairman Stanley Fischer looked to temper growing speculation of a September rate hike suggesting, “employment has been rising pretty fast relative to previous performance and yet inflation is very low.” Fischer said he would like to see inflation return to levels that are “more normal”. He added the FOMC has more information to parse over the next five weeks – before the September meeting. Fischer believes a rate hike in September will be, “a game-day decision”.

Atlanta Fed President Dennis Lockhart offered a different view, saying he is “very disposed” to the possibility of a September liftoff. While he remains on track for September liftoff he added, “waiting a meeting or two” wouldn’t be decisive for the economy. Lockhart echoed Fischer’s concerns about inflation but was confident it would rise in coming months as the US economy picks up steam. Following the favorable Non-Farm Payrolls report Lockhart added we are “just a shade” below full employment – and said the jobs data showed a “solid rise”.

Currently, four of the ten voting members for the September FOMC have voiced a more decisive hawkish view over recent months. For the remaining voters, their outlook suggests either a finer balance on data or an outright dovish lean. One agreed principle between the voters is a slow pace of rate hikes following liftoff with Lockhart noting, “Policy will likely transition from being aggressively stimulative toward merely stimulative.”

The US Dollar fell on the back of Fischer and Lockhart’s earlier comments primarily due to a less hawkish tone from both FOMC members (See Kristian Kerr’s USD Technical Analysis). However, after remarks from Lockhart later in the day seemed to revive the market’s hawkish interpretation of his bearing, the currency leveled out. The Dollar Index has experienced a lot of chop in recent days as market participants have been caught in circular commentary from the Fed and mixed economic data. 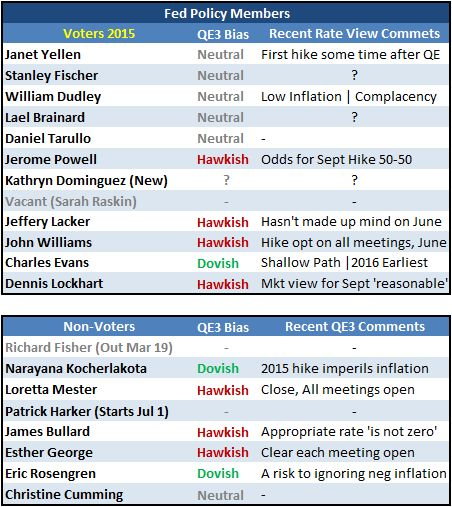