With strong long-term correlations to movements in the price of oil and gold as well as Chinese economic growth and industrial production data, the price of copper often aids in the identification of macro-economic trends. To this extent, the market has paused as investors digest the latest round of China’s GDP which is neither decisively disappointing nor resoundingly optimistic.

Largely considered the driver of global economic growth, China consumes 46% of the world’s copper supply and produces 34% of its output. Thus, a slowdown in the nation’s growth could signal a drop in demand for copper, just as an increase in growth could signal a rise. The latest data however, remains largely vailed in neutrality.

On one hand, at 7.4%, annual growth has increased at its slowest rate since 1990. This relatively lackluster growth yields stark implications for the global economy; last week the World Bank lowered its global growth forecast by 0.4 pp to 3.0%. Furthermore, the international organization’s outlook for China shows a continued deceleration—7.1% in 2015, 7.0% in 2016 and 6.9% in 2017. Given the direction of this series, exporters of commodities will likely have to contend with a loss in demand capable of suppressing copper prices.

On the other hand, at 7.4%, annual growth came in above the survey projection of 7.3%. Additionally, relative to several years back, the increased size of China’s economy will still generate more demand moving forward in spite of slower growth. Explained by numbers, output last year reached $10.3 trillion, more than double the figure 4 years ago in 2010 when growth rates were substantially higher at 10.4%. This pre-exisitng heightened demand many still yet lend support to copper prices moving forward. 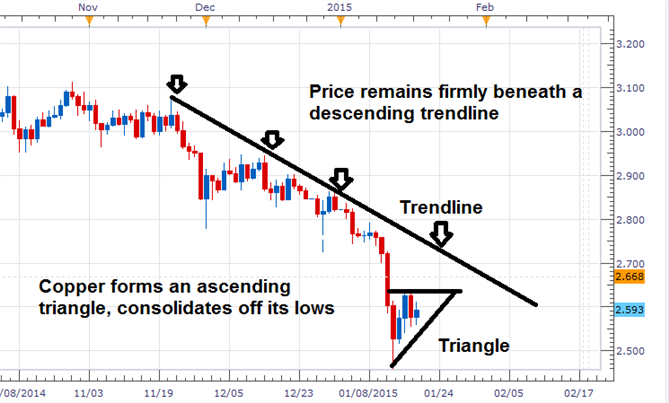