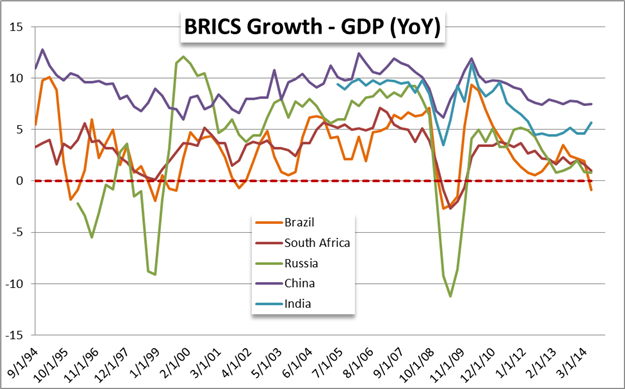 The countries of Brazil, Russia, India, China and South Africa, collectively known as the BRICS, are some of the leading emerging economies in the world today. However, they are blessed and blighted by different economic scenarios and do not have similar business cycles. Consequently, growth in these countries sees upturns and downturns that are not necessarily in sync with each other. We take a quick look at their individual GDP trends, monetary policy, and other factors that are likely to influence their respective economies in the near future.

- GDP: Recent reports indicated the country has officially entered a period of recession, with GDP contracting by 0.2 in the first quarter of the year (indicated by revisions) and 0.6 percent in the second quarter from the same periods a year earlier.

- Interest Rates: The drop in economic activity comes after a wave of rate hikes to 11.0 percent from the nation’s central bank, primarily to control high levels of inflation.

- Unique: Unemployment continues to remain historically low around 4 percent, but the private sector has recently seen fatigue and is creating fewer jobs.

- GDP: Growth in the nation has seen a significant cool down in recent quarters after GDP reports in the last two years have shown an expansion of a mere 1 percent.

- Interest Rates: The country’s central bank has been increasing interest rates in recent months to deal with high inflationary pressures (which faces greater upside pressures as a consequence of further global sanctions against Russia), and is expected to maintain a tight monetary policy in the foreseeable future. Current interest rate is 8.0 percent.

- Unique: Several sanctions have been passed against Russia with more expected after it continues to create disharmony in Ukraine through military might for the purpose of more lenient trade policies.

- GDP:The nation’s economy showed its largest expansion since the first quarter of 2012 at 5.7 percent in its latest reports

- Interest Rates: India continues to deal with inflation issues, arising due to structural and bureaucratic issues, and the central bank continues to maintain a tight monetary policy. Central bank rates are currently at 8.0 percent.

- Unique: The country has recently elected a new government, with expectations that it will bring its economic growth back on track

- GDP:Growth in China has largely slowed down in the last two years around the 7.5 percent mark, with recent trends indicating that the economic growth has flattened out.

- Interest Rates:The Asian Giant has kept its interest rates relatively unchanged for the past two years. Its refinancing rate currently stands at 3.25 percent.

- Unique: A sharp rise in credit has been seen in the last few months in China – and has been cited as the preventive cause of further deceleration in the country.

- GDP:The African nation has shown a slowdown in economic growth in recent years, dropping from 3.7 percent in December 2011 to 1.0 percent year-on-year in its last report

- Interest Rates: The nation faces issues of high unemployment (around 26 percent) and inflation (6.6 percent). Its central bank has been tightening monetary policy to prevent further inflationary pressures. Current Rates are at 5.5 percent.

- Unique: The country is facing issues of a growing credit bubble as well with its four largest banks downgraded recently by Moody’s

Taking a look at GDP figures, India’s and China’s growth rates clearly outpace the others. Brazil is currently the only BRICS nation in recession, but there will be no surprises if the strong slowdown in South Africa drags its economy backward as well.

Brazil leads the way with high interest rates among these nations with inflationary pressures offering no respite for it in the near-term. If India can make progress on eradicating its issues with bureaucratic red tape in the coming months, we may see more easing of monetary policy in Asia’s third largest economy. China’s recent loosening of its monetary policy had led to a sharp rise in credit and bad loans. Russia is unlikely to see lower rates unless it can deal with imminent sanctions resulting from its stand-off with Ukraine. (Note: Interest rates for China and Russia stand at 3.25 percent and 8.00 percent respectively, historical data was not available). 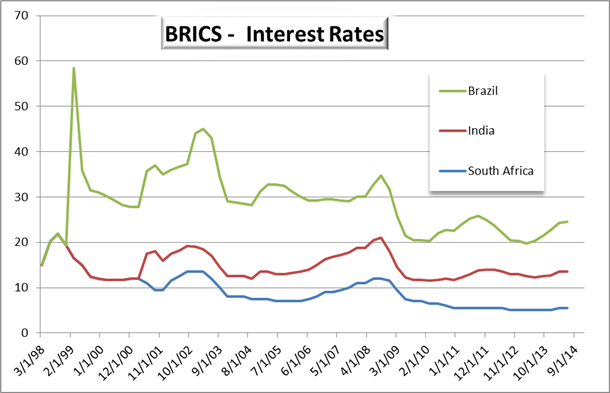 Certain common trends can be easily identified among these BRICS nations, even though their economies are vastly different. Inflation is a common threat to most, and it is taking its fair toll on growth as central banks of the respective nations keep increasing interest rates to counter inflationary pressures, making borrowing more expensive. China and India are the two nations among the five that are likely to show improvement in their economies based on improving investment sentiments and regulatory loosening. South Africa faces an uphill task of dealing with unemployment and inflation, and Brazil might have similar issues added to their agenda. Russia might be the worse placed among these nations. With its actions in Ukraine not making the world’s largest nation by area any friends, it will be interesting to see how the country reacts to further pressures imposed on it to back off its activities in Ukraine.