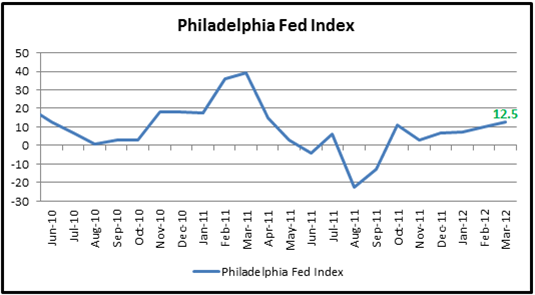 The Philadelphia Fed Index reached eleven-month high in March, suggesting accelerated growth in the regional manufacturing activity. The results from the Business Outlook Survey of Federal Reserve Bank of Philadelphia showed the index climbed to 12.5 this month from 10.2 in February to hit the highest level since April of last year. The reading exceeds consensus forecast of 12.0 from the Bloomberg News survey. The Philly Fed Index gauges changes in business growth in the third district including Pennsylvania, New Jersey and Delaware. The index above 0 indicates factory-sector growth while below 0 indicates contraction. In addition to stronger-than-expected Philly Fed figure, the March Empire State Manufacturing Survey issued an hour earlier also reveals that production in New York region expands at the fastest pace since June 2010 this month. Obviously, both indicators described continued strength in the U.S. manufacturing sector.

Within the Philadelphia Fed survey, indexes for new orders and shipments remained positive but weaken compared with their February levels that reflect lower demand for manufacturing goods this month. The new orders index plunged 8 points to 3.3 from 11.7 in the prior month while the shipments index slipped 12 points to 3.5 from 15.0. Besides, firms continued to report price pressures, but responses suggest that pressures have eased from the previous month. Indexes for prices paid and price received both decreased this month. Additionally, firms expected a slight pickup in levels of employment with the index staying in positive territory for seven straight months. The current employment index rose to 6.8 from 1.1 in the previous month though average employee workweek decline from 10.1 to 2.7

Manufacturing executives remains optimistic about the long-term business outlook. The future general index slightly declined to 32.9 this month from a previous reading of 33.3 in February but this was a relatively high level. Firms’ responses suggest modest improvement in new orders and shipment in coming months. Meanwhile, firms expecting to hire more employees over next six months (33 percent) outnumber those expecting to slash workers (11 percent) 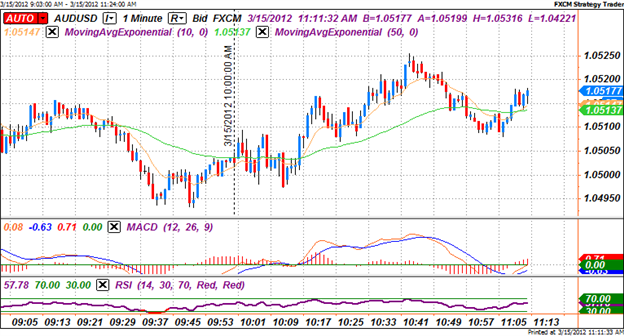 In the minutes following the Philly Fed Index report, the U.S. dollar edged lower versus most of its major trading partners except its Canadian counterpart. As can be seen from the one-minute AUDUSD chart above, the currency pair hiked about 25 pips from 1.0500 to 1.0525 within forty minute. The greenback saw a brief correction after that but still traded under pressure versus the aussie. At the time this report was written, the Australian dollar traded at $1.0517.