With the immediate impact of US-China trade agreement headlines now in the rearview, markets will likely shift focus to upcoming September retail sales data on deck for release next week. I noted in Thursday’s US Dollar price volatility report that the greenback was exposed to further downside after breaching a major technical support level and with US-China trade talk developments still at large. Additional selling in the US Dollar did materialize, but was once again driven more-so by counterpart strength rather than weakness itself. 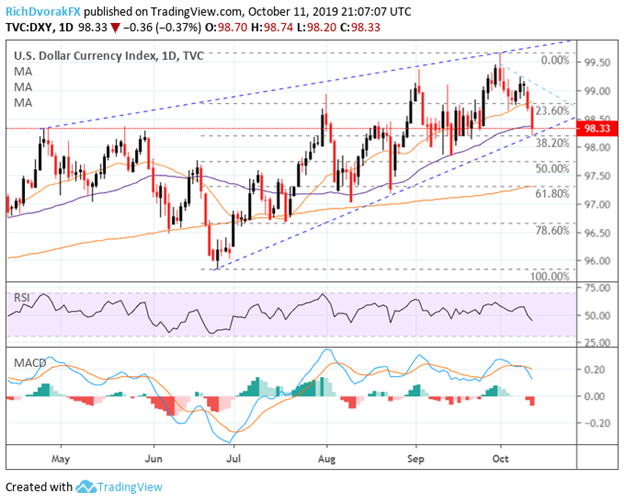 The latest drop in the dollar sent the DXY Index swooning below its 50-day simple moving average toward its rising support line extended from the June 25 and August 23 intraday swing lows. This bullish trendline will look to continue keeping the US Dollar afloat going forward while drop below exposes the mid-point retracement of the US Dollar’s trading range since late June and 200-day simple moving average.

SEPTEMBER US RETAIL SALES DATA DUE 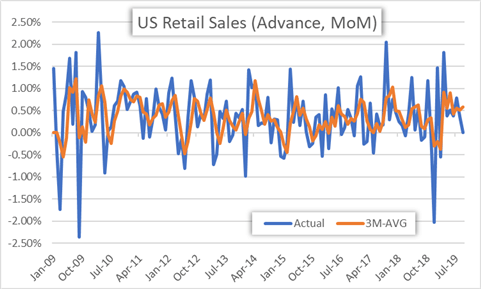 We have previously pointed out how the US consumer is the backbone of America’s economy. Fed officials have underscored how US consumers remain strong and economic outlook remains favorable despite rising downside risks. Although, much of the downside risk stems from the US-China trade war, which could be in its early stages of subsiding.

That said, with US-China trade uncertainty taking a turn for the better, a solid US retail sales number could provide the Fed with another reason to leave interest rates unchanged at its upcoming meeting. The median economist estimate for September Retail Sales Advance (MoM) is 0.3%, which is listed on the DailyFX Economic Calendar. 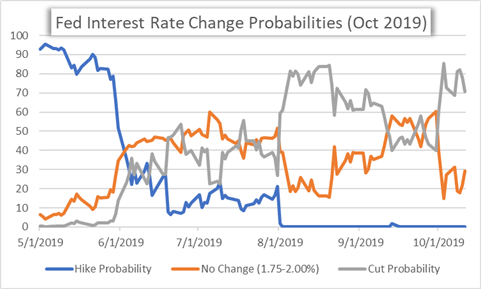 A solid consumer sentiment report released earlier Friday is another piece of evidence in favor of a hawkish Fed argument. Today’s news helped push the probability of a third FOMC interest rate cut this year at its next meeting down to 70.8% chance from 82.2% earlier this week.