The US Dollar came under pressure during Thursday’s trading session, which pushed the DXY Index below a critical support level. USD price action could still gravitate back above this confluent area, however, seeing that downside was driven more-so by counterpart strength rather than greenback weakness. Specifically, EURUSD surged after September ECB minutes confirmed division amongst the central bank’s officials while GBPUSD skyrocketed on renewed Brexit deal hopes. EURUSD and GBPUSD comprise 57.6% and 11.9% of the DXY Index respectively. 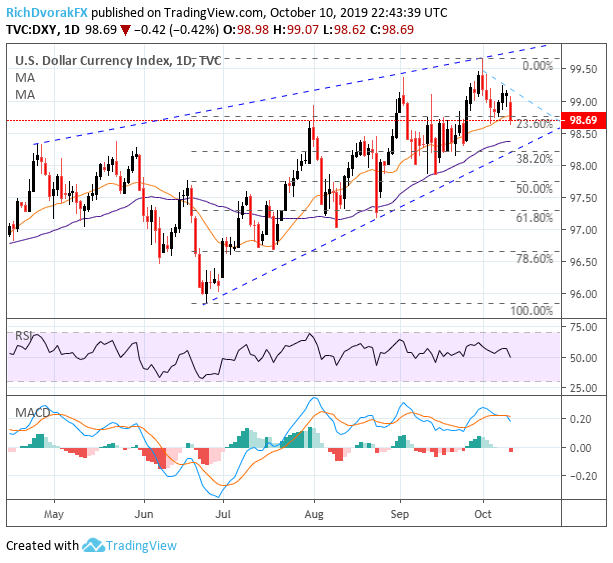 The latest stretch of US Dollar selling pressure pushed the RSI back to 50 and caused the MACD indicator to roll over as bearish momentum gains pace. That said, the DXY Index remains exposed to further downside since breaching the 23.6% Fibonacci retracement level and 20-day simple moving average. If the DXY Index fails to quickly reclaim this major level of confluence, forex traders will likely look to the US Dollar’s 50-DMA and bullish trendline extended from its series of higher lows since mid-June for potential support.

In addition to the aforementioned technical support zone, the US Dollar’s fundamental backdrop seemingly improved over the last 24-hours, which could help keep USD price action relatively anchored. The September FOMC minutes published on Wednesday underscored how Fed officials are virtually split over whether to cut interest rates further or not, while another sticky core CPI datapoint has potential to undermine the central bank’s ability to provide additional monetary policy accommodation. 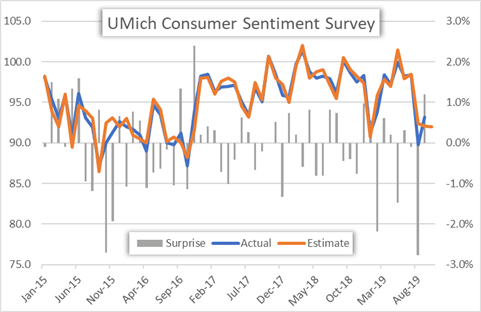 Consumer attitudes could grow more sanguine regarding economic outlook and future spending plans, however, seeing that the Federal Reserve just provided back-to-back interest rate cuts hoping to boost inflation and insure against rising downside risks. Yet, the impact that central bank policy action has takes time to trickle its way into the economy and could be overshadowed by the dismal manufacturing and services PMI reports published two weeks ago.

Nevertheless, US-China trade talks are supposedly still scheduled to continue on Friday despite conflicting reports from Washington and Beijing. It is rumored that negotiators from the US and China are weighing a potential currency pact as part of a preliminary trade deal, which could provide the White House with a reason to delay the 5% tariff hike on $250 billion of Chinese goods currently scheduled to take effect on October 15.

That said, markets have been enticed with similar headlines before that have previously failed to bear any fruit. Consequently, effective implementation of risk management techniques is imperative in light of elevated volatility caused by the trade war headlines lobbed back and forth between parties, which is likely to persist until a tangible agreement actually materializes. 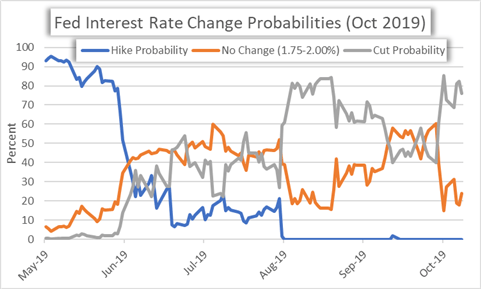 Alas, US Dollar price action will likely be driven largely by the market’s priced expectations for future FOMC interest rate cuts, which stand to respond materially to the latest US-China trade war developments and upcoming consumer sentiment report. According to the latest overnight swaps data, traders are currently pricing a 75.9% probability that the Fed lowers its policy interest rate by at least 25-basis points for a third consecutive meeting later this month.

Also, sentiment-linked USDJPY could get a sizable jolt during Friday’s trading session – particularly if there’s a sharp rise in Fed rate cut bets that fuel a Yen breakout. Furthermore, keep USDCAD on the radar seeing that the Canadian Dollar is at risk ahead of the upcoming jobs report and BOC meeting.