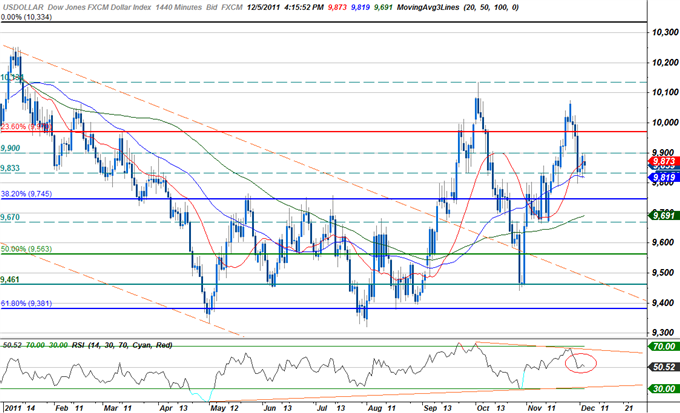 The greenback was softer at the close of North American trade with the Jones FXCM Dollar Index (Ticker:USDollar) sliding 0.32%. Calls for more coercive budget discipline among EU member nations by German Chancellor Angela Merkel and French President Nicolas Sarkozy fueled a rally in risk early in the week with the dollar coming under pressure as traders jettisoned the dollar in favor of higher yielding assets. The two look to seek approval from the 27 EU nations at Friday’s summit with hopes of a resolution to the debt crisis continuing to support the risk trade. Markets pared some of the early gains mid-day however after a report out of the Wall Street Journal cited that rating agency Standard & Poor’s would put Euro nations on negative watch for a possible downgrade. Indeed after the close S&P put 15 nations on negative watch, including euro juggernauts Germany and France citing “Systemic stress in the eurozone has risen in recent weeks and reached such a level that a review of all eurozone sovereign ratings is warranted.” The report saw stocks pare early gains with the Dow, the S&P, and NASDAQ closing well off session highs for a gain of 0.65%, 1.03%, and 1.10% respectively.

The dollar continues to hold above the 9830 level cited in previous reports as risk sold-off on S&P headlines with the index rebounding off support to close 9860. Daily support rests here backed by the 38.2% Fibonacci extension taken from the June 2010 and November 2010 crests at 9745 with resistance holding at 9900 and the 23.6% extension at 9970. Note that the index continues to hold between the 20 and 50-day moving averages at 9883 and 9818 respectively with a flattening RSI suggesting the dollar may be poised for a breakout. 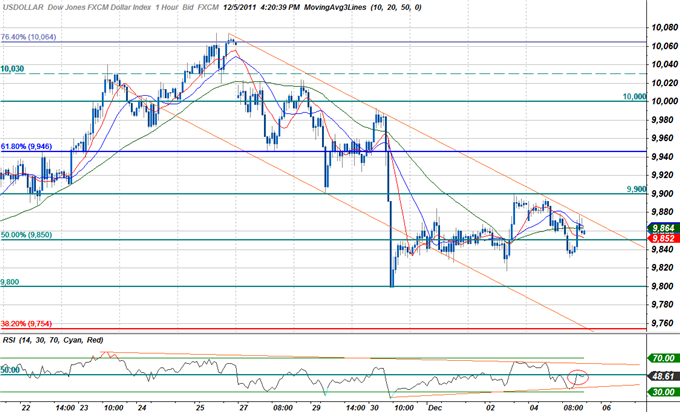 An hourly chart shows the index holding within the confines of the descending channel dating back to the November 25th with price action continuing to straddle the 50% Fibonacci extension taken from the August 1st and October 27th troughs at 9850. A breach of channel resistance coupled with and RSI break above 50 eyes topside targets at 9900 and the 61.8% extension at 9946. Interim support rests at 9800 backed by the 38.2% extension at 9754.

The greenback fell against all four component currencies highlighted by a 0.57% decline against the Australian dollar. The aussie was substantially higher on the session until speculation regarding possible debt downgrades once again saw traders turn on risk ahead of the close with the AUD/USD closing near session lows. The euro was the worst performer of the lot with a marginal advance of just 0.09% after the late-day sell-off saw the pair plummet more than 100 pips off session highs. The sterling and the yen saw similar performances with gains of 0.34% and 0.31% respectively as risk-on trades weighed on the dollar.

Tomorrow’s US economic calendar provides little in the way of event risk with only the IBD/TIPP economic optimism survey on tap. Traders continue to eye key prints later this week with the RBA rate decision up first tonight. The central bank is widely expected to cut the benchmark interest rate with Credit Suisse overnight swaps factoring in an 80% chance of a 25 basis point cut. Investors continue to eye this week’s jam packed docket with additional rate decisions on tap from the RBNZ, BoE, BoC, and the ECB, with events culminating to Friday’s crucial EU summit where officials will attempt to ease debt concerns with a comprehensive “re-haul” of the euro project.