AUD/USD trades to a fresh yearly low (0.7062) after failing to defend the August low (0.7106), and fresh developments coming out of Australia may keep the exchange rate under pressure as the Gross Domestic Product (GDP) is anticipated to show a contraction in the growth rate.

AUD/USD extends the decline from earlier this month as Federal Reserve Chairman Jerome Powell strikes a hawkish tone in front of US lawmakers, and the Australian Dollar may continue to depreciate against its US counterpart as the Reserve Bank of Australia (RBA) remains in no rush to implement higher interest rates.

The update to Australia’s GDP report may keep the RBA on the sidelines as the economy is expected to contract 2.7% in the third quarter of 2021, with the growth rate slowing to 3.0% from 9.6% per annum during the three-months through June.

As a result, the RBA appears to be on track to retain the current policy at its last interest rate decision for this year as “the central scenario for the economy continued to be consistent with the cash rate remaining at its current level until 2024,” and the Australian Dollar may face headwinds ahead of the next meeting on December 7 as Governor Philip Lowe and Co. remains “committed to maintaining highly supportive monetary conditions to achieve a return to full employment in Australia and inflation consistent with the target.”

In turn, AUD/USD may continue to trade to fresh yearly lows over the remainder of 2021 as the Federal Reserve carries out its exit strategy, but a further decline in the exchange rate may fuel the tilt in retail sentiment like the behavior seen earlier this year. 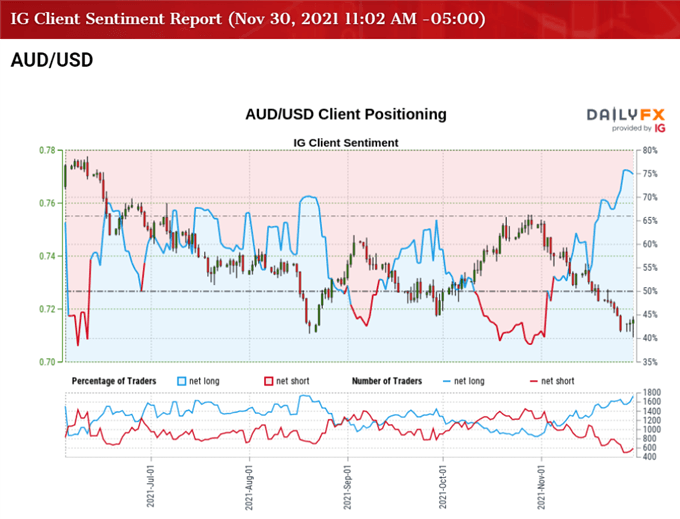 The IG Client Sentiment report shows 72.22% of traders are currently net-long AUD/USD, with the ratio of traders long to short standing at 2.60 to 1.

With that said, the update to Australia’s GDP report may keep AUD/USD under pressure as the growth rate is expected to contract in the third quarter, and the weakness in the exchange rate may persist as long as the Relative Strength Index (RSI) sits in oversold territory.