NZD/USD extends the series of lower highs and lows from late last week as it trades to a fresh monthly low (0.6954), but the Reserve Bank of New Zealand (RBNZ) interest rate decision may sway the near-term outlook for the exchange rate as the central bank is expected to deliver another rate hike.

NZD/USD appears to be on track to test the October low (0.6877) on the back of US Dollar strength, and the exchange rate may continue to depreciate over the remainder of the month as the Federal Reserve carries out its exit strategy.

However, the RBNZ’s last meeting for 2020 may spark a bullish reaction in the New Zealand Dollar as the central bank is expected to increase the official cash rate (OCR) to 0.75% from 0.50%, and a second straight rate hike along with a hawkish forward guidance for monetary policy may curb the recent decline in NZD/USD as Governor Adrian Orr and Co. warn that “further removal of monetary policy stimulus is expected over time.”

As a result, expectations for higher interest rates in 2022 may generate a near-term rebound in NZD/USD, but the New Zealand Dollar may face a bearish fate if the RBNZ delivers a dovish rate hike or votes to leave the OCR at 0.50%.

In turn, NZD/USD may continue to give back the advance from the October low (0.6877) unless the RBNZ carries its hiking cycle into the year ahead, but a further decline in the exchange rate may fuel the recent flip in retail sentiment like the behavior seen earlier this year. 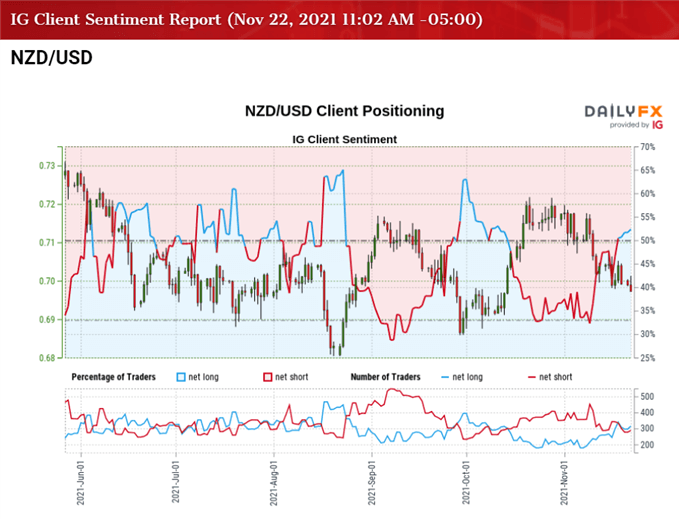 The IG Client Sentiment report shows 54.01% of traders are currently net-long NZD/USD with the ratio of traders long to short standing at 1.17 to 1.

The number of traders net-long is 11.49% higher than yesterday and 20.88% higher from last week, while the number of traders net-short is 1.44% higher than yesterday and 12.19% lower from last week. The jump in net-long interest has spurred a shift in retail sentiment as 40.82% of traders were net-long NZD/USD last week, while the decline in net-short position could be a function of profit-taking behavior as the exchange rate trades to a fresh monthly low (0.6954).

With that said, the RBNZ meeting may influence NZD/USD ahead of the Federal Open Market Committee’s (FOMC) rate decision on December 16 as Chairman Jerome Powell and Co. are slated to update the Summary of Economic Projections (SEP), but the failed attempts to push back above the 50-Day SMA (0.7046) indicates a potential change in the near-term trend as the moving average starts to reflect a negative slope.