NZD/USD is on track to stage a four day rally after following the failed attempt to test the August low (0.6805), and the Reserve Bank of New Zealand (RBNZ) interest rate decision may fuel larger recovery in the exchange rate as the central bank is expected to deliver a rate hike.

NZD/USD trades near the monthly high (0.6982) as the US Dollar gives back the advance during the final week of September, and the exchange rate may stage a larger rebound over the coming days as the RBNZ is anticipated to lift the official cash rate (OCR) to 0.50% from 0.25%.

A change in regime may trigger a bullish reaction in the New Zealand Dollar as the RBNZ starts to normalize monetary policy, and indications of a hiking cycle may charge a further advance in NZD/USD as market participants prepare for higher interest rates.

However, the renewed lockdowns across Asia/Pacific may push the RBNZ to revert to a wait-and-see approach after raising the OCR as Prime Minster Jacinda Ardern acknowledges that “long periods of heavy restrictions has not got us to zero cases,” and the three-phased approach in removing the COVID-19 restrictions may push the central bank to deliver a dovish rate hike as

As a result, the RBNZ’s forward guidance may have a greater influence on NZD/USD as the Federal Reserve looks poised to switch gears later this year, but a further advance in the exchange rate may lead to a flip in retail sentiment like the behavior seen earlier this year. 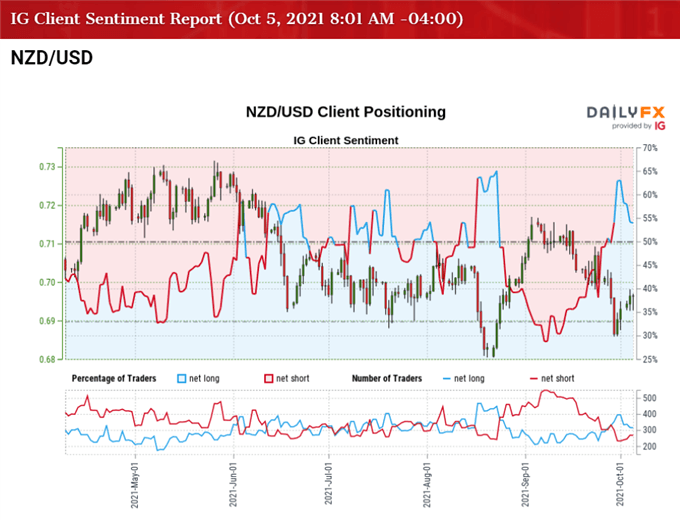 The IG Client Sentiment report shows 55.66% of traders are currently net-long NZD/USD, with the ratio of traders long to short standing at 1.26 to 1.

The number of traders net-long is 4.71% lower than yesterday and 12.79% higher from last week, while the number of traders net-short is 1.86% higher than yesterday and 19.17% lower from last week. The tilt in retail sentiment has narrowed despite the rise in net-long interest as 56.74% of traders were net-long NZD/USD at the end of last week, while the decline in net-short position comes as the exchange rate holds near the monthly high (0.6982).

With that said, the rebound from the August low (0.6805) may turn out to be a correction in the broader trend as the bull flag formation from earlier this month failed to transpire, but the RBNZ rate decision may fuel a larger recovery in the exchange rate if the central bank looks to deliver a series of rate hikes.