NZD/USD carves a series of lower highs and lows as it pulls back from the weekly high (0.7010), but the Federal Reserve interest rate decision may keep the exchange rate afloat as the central bank is expected to retain the current policy.

NZD/USD gives back the advance from the monthly low (0.6881) as the US Dollar outperforms against the commodity bloc currencies, and the Greenback may continue to appreciate against its New Zealand counterpart if the Federal Open Market Committee (FOMC) shows a greater willingness to scale back its emergency measures.

It seems as though the Fed will follow a similar path to the Reserve Bank of New Zealand (RBNZ) as Governor Adrian Orr and Co. announced plans to “halt additional asset purchases under the Large Scale Asset Purchase (LSAP) programme by 23 July 2021,” and the FOMC may start to lay out a tentative exit strategy as Chairman Jerome Powell tells US lawmakers that the committee will “provide advance notice before announcing any decision to make changes to our purchases.”

As a result, the Fed rate decision may keep NZD/USD under pressure if Chairman Powell and Co. indicate a greater willingness to switch gears, but more of the same from the FOMC may produce a bearish reaction in the Greenback as “the Committee's standard of ‘substantial further progress’ was generally seen as not having yet been met.”

In turn, it remains to be seen if the decline from the June high (0.7288) will turn out to be a potential change in the broader trend as NZD/USD trades below the 200-Day SMA (0.7084) for the first time since June 2020, but the consolidation in the exchange rate may continue to spur a shift in retail sentiment as traders flip net-long for the fourth time in July. 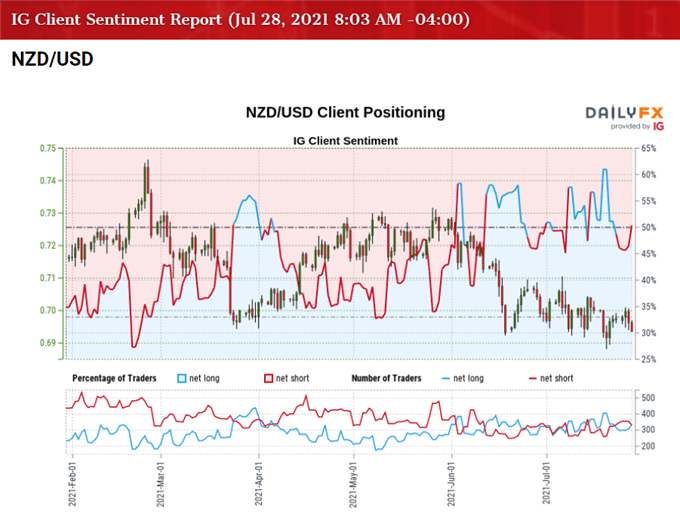 The IG Client Sentiment report shows 51.48% of traders are currently net-long NZD/USD, with the ratio of traders long to short standing at 1.06 to 1.

The number of traders net-long is 14.37% higher than yesterday and 0.27% higher from last week, while the number of traders net-short is 9.18% higher than yesterday and 1.99% lower from last week. The marginal rise in net-long position comes even as NZD/USD carves a series of lower highs and lows, while the decline in net-short position has done little to alleviate the shift in retail sentiment as 58.28% of traders were net-long the pair last week.

With that said, a further consolidation in NZD/USD may continue to spur a shift in retail sentiment to mimic the behavior from earlier this month, and the Fed rate decision may sway the near-term outlook for the exchange rate if the central bank adjusts the forward guidance for monetary policy.