AUD/USD attempts to retrace the decline following the US Consumer Price Index (CPI) on the back of US Dollar weakness, and fresh data prints coming out of Australia may spark a larger rebound in the exchange rate as employment is expected to increase for the second consecutive month.

AUD/USD appears to be stuck in a narrow range as Chairman Jerome Powell is scheduled to testify in front of the House Financial Services Committee later today, with the prepared remarks largely highlighting a wait-and-see approach for monetary policy as the central bank head pledges to “to increase our holdings of Treasury securities and agency mortgage‑backed securities at least at their current pace until substantial further progress has been made toward our maximum-employment and price-stability goals.”

It seems as though the Federal Open Market Committee (FOMC) remains reluctant to switch gears as Chairman Powell insists that the “reaching the standard of ‘substantial further progress’ is still a ways off,” and the US Dollar may face headwinds ahead of the next Fed interest rate decision on July 28 as the central bank remains committed to “do everything we can to support the recovery and foster progress toward our statutory goals of maximum employment and stable prices.”

Meanwhile, fresh data prints coming out of Australia may fuel the recent rebound in AUD/USD as the economy is anticipated to add 30.0K in June, and a further improvement in the labor market may encourage the Reserve Bank of Australia (RBA) to adopt an improved outlook as “the economic recovery in Australia is stronger than earlier expected and is forecast to continue.”

In turn, the RBA may start to discuss an exit strategy as “the final draw-downs under the Term Funding Facility were made in late June,” and it remains to be seen if Governor Philip Lowe and Co. will adjust the forward guidance at the next meeting on August 3 as the central bank pledges to “not increase the cash rate until actual inflation is sustainably within the 2 to 3 per cent target range.”

Until then, the decline from the February high (0.8007) may turn out to be a change in the broader trend as AUD/USD trades to a fresh yearly low (0.7410) in July, with the weakness in the exchange rate spurring a shift in retail sentiment as traders flipped net-long the pair during the same period. 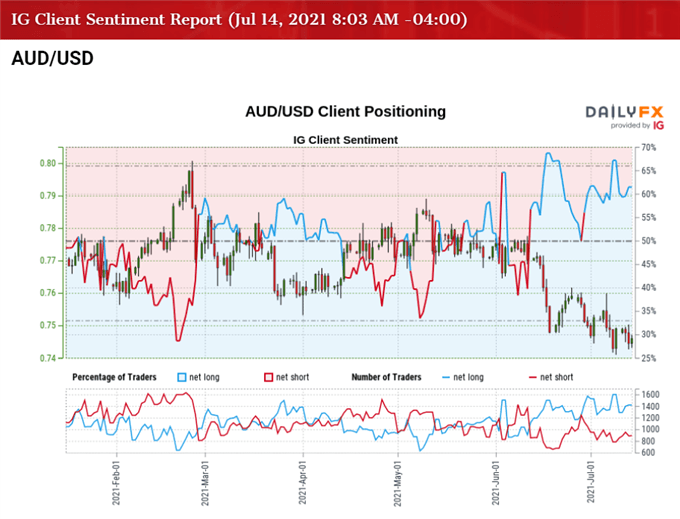 The IG Client Sentiment report shows 60.97% of traders are currently net-long AUD/USD, with the ratio of traders long to short standing at 1.56 to 1.

The number of traders net-long is 0.55% higher than yesterday and 0.83% higher from last week, while the number of traders net-short is 6.29% lower than yesterday and 2.18% higher from last week. The rise in net-long position comes as AUD/USD attempts to retrace the decline from earlier this week, while the rise in net-short interest has done little to alleviate the tilt in retail sentiment as 63.56% of traders were net-long the pair last week.

With that said, the weakness in AUD/USD may continue to coincide with the shift in retail sentiment like the behavior seen earlier this year, but the update to Australia’s Employment report may spark a larger rebound in the exchange rate as job growth is expected to increase for the second consecutive month.