USD/CAD struggles to push back above the 200-Day SMA (1.2608) as it tracks the range bound price action carried over from the previous week, and the exchange rate may continue to consolidate ahead of the Federal Reserve interest rate decision on July 28 as the central bank is expected to retain the current policy.

USD/CAD is little changed from the start of the week even as the Durable Goods Orders report warns of a slower-than-expected recovery, with demand for large-ticket items increasing 0.8% in June versus forecasts for a 0.8% print.

It remains to be seen if the Federal Open Market Committee (FOMC) will respond to the lackluster data prints as a deeper look at the report shows Non-Defense Capital Goods Orders excluding Aircrafts, a proxy for business investment, increasing 0.5% during the same period amid projections for a 0.7% rise, and signs of limited consumption may keep the Fed on the sidelines as Chairman Jerome Powell tells US lawmakers that “reaching the standard of ‘substantial further progress’ is still a ways off.”

In turn, the FOMC may stay on track to “increase its holdings of Treasury securities by at least $80 billion per month and of agency mortgage‑backedsecurities by at least $40 billion per month” ahead of the next quarterly meeting in September, and more of the same from Chairman Powell and Co. may produce headwinds for the Greenback as the central bank remains reluctant to switch gears.

However, the FOMC may start to lay out a tentative exit strategy as “various participants mentioned that they expected the conditions for beginning to reduce the pace of asset purchases to be met somewhat earlier than they had anticipated at previous meetings,” and a material change in the Fed’s forward guidance may generate a bullish reaction in the US Dollar as the central bank shows a greater willingness to taper its emergency programs.

Until then, USD/CAD maycontinue to trade below the 200-Day SMA (1.2608) as it tracks the range bound price action from last week, but a further decline in the exchange rate may fuel the recent shift in retail sentiment as traders flip net-long the pair to reflect the crowding behavior seen earlier this year. 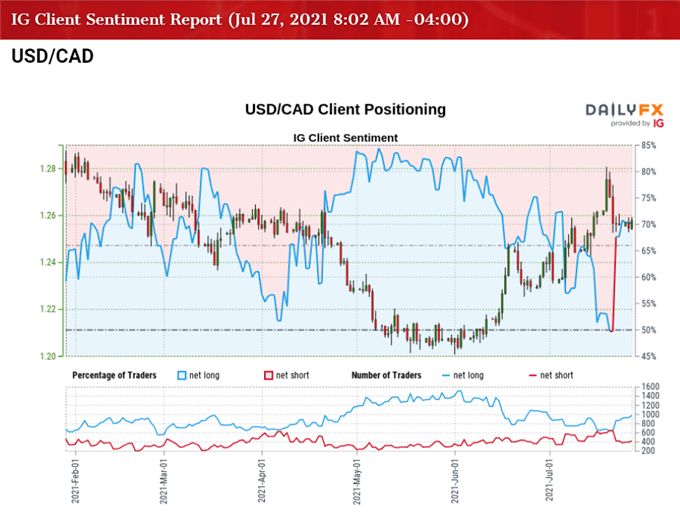 The IG Client Sentiment report shows 69.20% of traders are currently net-long USD/CAD, with the ratio of traders long to short standing at 2.25 to 1.

The number of traders net-long is 1.56% higher than yesterday and 47.73% higher from last week, while the number of traders net-short is 4.33% higher than yesterday and 38.79% lower from last week. The jump in net-long interest has fueled the flip in retail sentiment as 48.71% of traders were net-long USD/CAD last week, while the decline in net-short position could be a function of profit-taking behavior as the exchange rate appears to be stuck in a narrow range.

With that said, the crowding behavior from earlier this year has resurfaced even as USD/CAD struggles to push back above the 200-Day SMA (1.2608), and the developments following the Fed rate decision are likely to set the tone over the near-term as Chairman Jerome Powell and Co. are slated to update the Summary of Economic (SEP) projections in September.