The price of oil trades to a fresh monthly high ($64.53) following a smaller-than-expected rise in US stockpiles, and crude prices may continue to trade within the March range as the Organization of the Petroleum Exporting Countries (OPEC) stay on track to gradually restore production over the coming months.

The price of oil extends the series of higher highs and lows from earlier this week as OPEC and its allies remain in no rush to push crude output towards pre-pandemic levels, and the press release following the Joint Ministerial Monitoring Committee (JMMC) meeting suggests the group will continue to regulate the energy market over the coming months as it reminds “all Participating Countries to remain vigilant and flexible given the uncertain market conditions.”

It seems as though OPEC and its allies will stick to the same script at the next JMMC meeting on June 1 as the group references the production adjustments table from the previous conference, and it remains to be seen if OPEC+ will restore output beyond July as fresh data prints coming out of the US instill an improved outlook for demand.

Updated figures from the Energy Information Administration (EIA) showed crude inventories increasing a marginal 0.09M in the week ending April 23 versus forecasts for a 0.659M rise, and the development may encourage OPEC and its allies to boost production throughout 2021 as US output remains around its lowest level since 2018.

A deeper look at the EIA report showed weekly US field output narrowing to 10,900K during the same period after printing at 11,000K for two weeks, and the ongoing weakness in non-OPEC production may keep oil prices afloat as OPEC’s most recent Monthly Oil Market Report (MOMR) emphasizes that “oil demand in the 2H21 is projected to be positively impacted by a stronger economic rebound than assumed last month.”

With that said, the price of oil appears to have reversed course after defending the March low ($57.25) as US production remains below pre-pandemic levels, and crude may attempt to test the March high ($67.98) over the coming days as it extends the series of higher highs and lows from earlier this week. 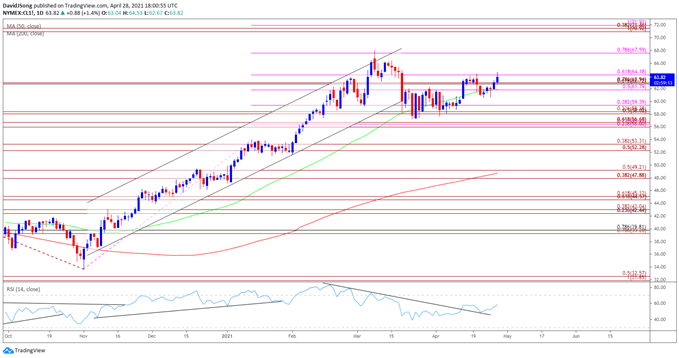