EUR/USD has broken out of the opening range for December following the Federal Reserve’s last meeting for 2020, and the exchange rate may continue to appreciate as long as the Relative Strength Index (RSI) holds in overbought territory.

Looking ahead, it seems as though the FOMC will continue to endorse a dovish forward guidance as the central bank remains “prepared to adjust the stance of monetary policy as appropriate,” and it remains to be seen if Chairman Jerome Powell and Co. will take additional steps at its next interest rate decision on January 27 as US lawmakers struggle to pass another round of fiscal stimulus.

Until then, swings in risk appetite may continue to sway EUR/USD even though the European Central Bank (ECB) expands the pandemic emergency purchase programme (PEPP) by EUR 500B to EUR 1.850 trillion ahead of 2021, and the tilt in retail sentiment also looks poised to persist as the crowding behavior from earlier this year resurfaces. 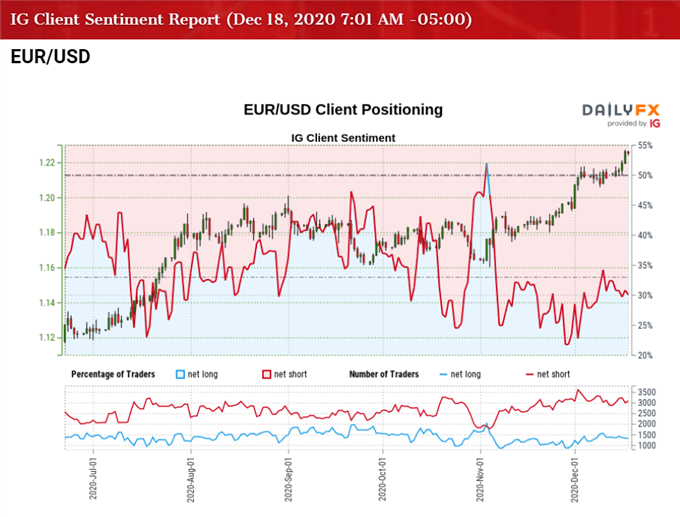 The rise in net-long position comes as EUR/USD breaks out of the opening range for December, while the decline in net-short interest has helped to alleviate the tilt in retail sentiment as only 30.60% of traders were net-long EUR/USD during the previous week.

With that said, the consolidation from the September high (1.2011) appears to have been an exhaustion in the EUR/USD rally rather than a change in trend as the crowding behavior from earlier this resurfaces, and the exchange rate may continue to appreciate as long as the Relative Strength Index (RSI) tracks the upward trend from November to hold in overbought territory.