AUD/USD pulls back from the monthly high (0.7243) as the US Dollar recovers against most of its major counterparts, but the improvement in risk appetite may keep the exchange rate afloat as the Greenback reflects an inverse relationship with investor confidence.

AUD/USD appears to be unfazed by headlines stating that China has banned coal imports from Australia as Trade Minister Simon Birmingham insists that “we do not have proof that this is occurring” during an interview with Sky News.

The price action following the Reserve Bank of Australia (RBA) interest rate decision suggests that the decline from the yearly high (0.7414) may have been an exhaustion in the bullish trend rather than a change in market behavior as AUD/USD clears the monthly opening range, with the Relative Strength Index (RSI) displaying a similar dynamic as it breaks out of the downward trend carried over from the previous month.

In turn, the advance from the monthly low (0.7096) may gather pace as the bearish momentum abates, but the update to Australia’s Employment report may drag on AUD/USD as the economy is expected to shed 35K jobs in September.

At the same time, the ASX 30 Day Interbank Cash Rate Futures continues to reflect a greater than 70% probability for a rate cut in November, and speculation for an RBA rate cut may produce headwinds for the Australian Dollar as the “Board continues to consider how additional monetary easing could support jobs as the economy opens up further.”

However, it remains to be seen if the RBA will deploy more non-standard tools to insulate the economy after tweaking the Term Funding Facility (TFF) in September, and Governor Philip Lowe and Co. may stick to the same script at the next meeting on November 3 as Treasurer Josh Frydenbergplans to provide additional fiscal support through income tax cuts.

Until then, swings in investor confidence may continue to sway AUD/USD as key market trends remain in place, with the tilt in retail sentiment resurfacing in October as retail traders flip net-short the pair. 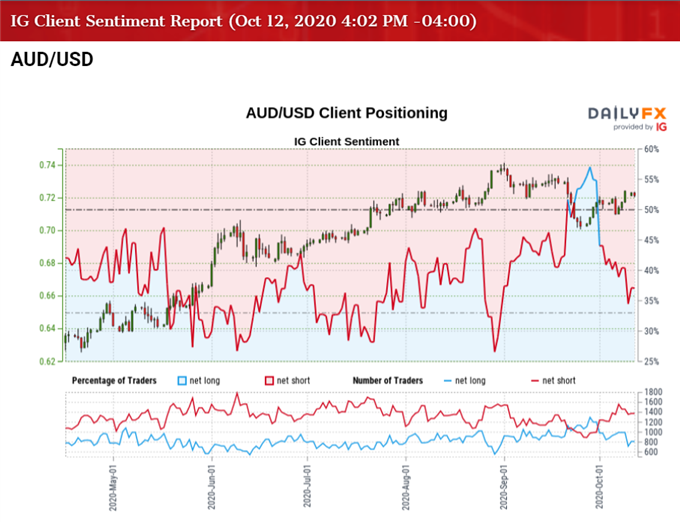 The rise in net-long position comes as AUD/USD clears the monthly opening range, while the rise in net-short interest has spurred a greater tilt in retail positioning as 41.58% of traders were net-long the pair during the previous week.