AUD/USD struggles to retain the rebound from the September low (0.7006) as the US Dollar appreciates on the back of waning risk appetite, and shifts in investor confidence may continue to influence the exchange rate as key market trends get carried into October.

AUD/USD broadly tracks the recent weakness in global equity prices as the Reserve Bank of Australia (RBA) interest rate decision sparks a limited reaction, but the decline from the yearly high (0.7414) may turn out to be an exhaustion in the bullish trend rather than a change in market behavior as Governor Philip Lowe and Co. appear to be in no rush to alter the path for monetary policy.

Looking ahead, the update to the federal budget may keep the RBA on the sidelines as Treasurer Josh Frydenberg plans to deliver an “additional $17.8 billion in personal income tax relief to support the economic recovery, including an additional $12.5 billion over the next 12 months,” with the fresh figures for 2020-21 bringing the “overall support to $507 billion,including $257 billion in direct economic support.”

In turn, the RBA may rely on its current tools to insulate the economy after tweaking the Term Funding Facility (TFF) in September, and the central bank may stick to the same script at the next meeting on November 3 as “the Board continues to consider how additional monetary easing could support jobs as the economy opens up further.” 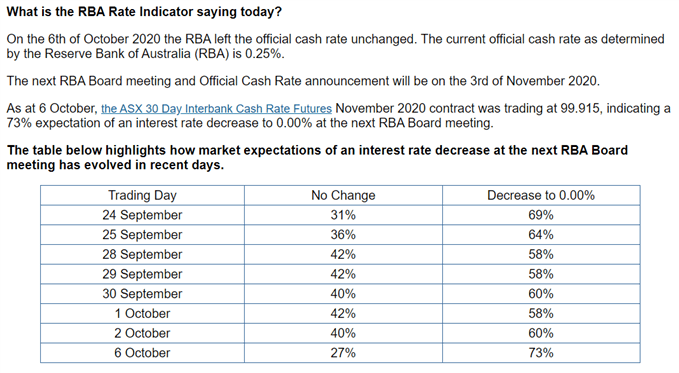 However, market participants have pushed out expectations for monetary stimulus as the ASX 30 Day Interbank Cash Rate Futures reflect a greater than 70% probability for a rate cut in November, and speculation for lower interest rates paired with a further deterioration in risk appetite may keep AUD/USD under pressure as key market trends remain in place. 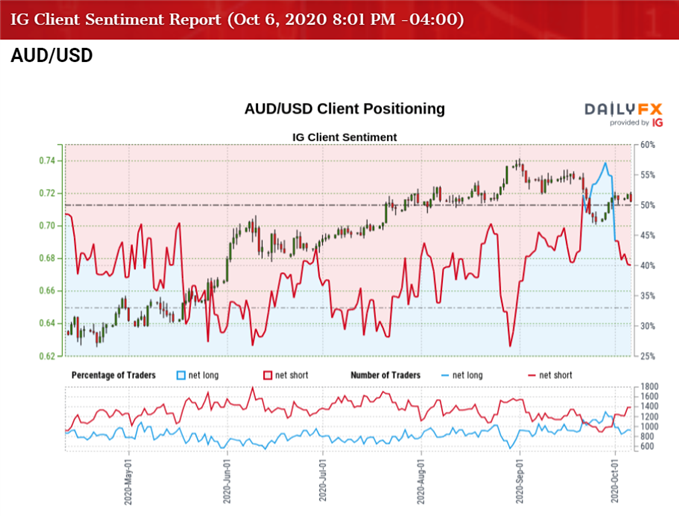 The decline in net-long position could be an indication of stop-loss orders getting triggered as AUD/USD struggles to retain the advance from the September low (0.7006), but the rise in net-short interest has spurred a further tilt in retail sentiment as 48.88% of traders were net-long the pair during the previous week.