USD/CAD extends the advance from earlier this week to trade to a fresh monthly high (1.3418), and the exchange rate may continue to search to resistance as long as the Relative Strength Index (RSI) tracks the upward trend established in September.

USD/CAD has pushed back above the former-support zone around the March/June low (1.3315) on the back of US Dollar strength, with the appreciation in the Greenback largely coinciding with the weakness in global equity prices as there appears to be shift in risk appetite.

The Federal Reserve interest rate decision appears to have sapped investor confidence as the update to the Summary of Economic Projections (SEP)showed the longer run interest rate forecast unchanged from the June meeting, and it seems as though the Federal Open Market Committee (FOMC) will rely on its current tools to support the US economy as the central bank vows to “increase its holdings of Treasury securities and agency mortgage-backed securities at least at the current pace.”

In turn, the FOMC may continue to endorse a wait-and-see approach as Chairman Jerome Powell tells US lawmakers that “many economic indicators show marked improvement,” and it seems as though the Fed is in no rush to adjust the path for monetary policy as Governor Randal Quarles insists that “the economy has rebounded more strongly than almost any forecaster expected.”

Governor Quarles states that “the Committee will be closely watching for a further recovery of inflation and signs that inflation expectations remain well anchored as we set monetary policy” while speaking at a virtual event hosted by the Institute of International Bankers, with the official going onto say that “I am optimistic that the United States can avoid the highly adverse outcomes that many feared would materialize.”

The comments suggest the FOMC will continue to adjust its current tools rather than deploy more non-standard measures as the US economy appears to have avoided the worst-case scenario, and it seems as though Chairman Powell and Co. will stick to the same script at the next interest rate decision on November 5 as “it will take continued support to sustain a robust recovery.”

Until then, the crowding behavior in USD/CAD looks poised to persist even though the Fed’s balance sheet holds above $7 trillion in September as traders have been net-long the pair since mid-May. 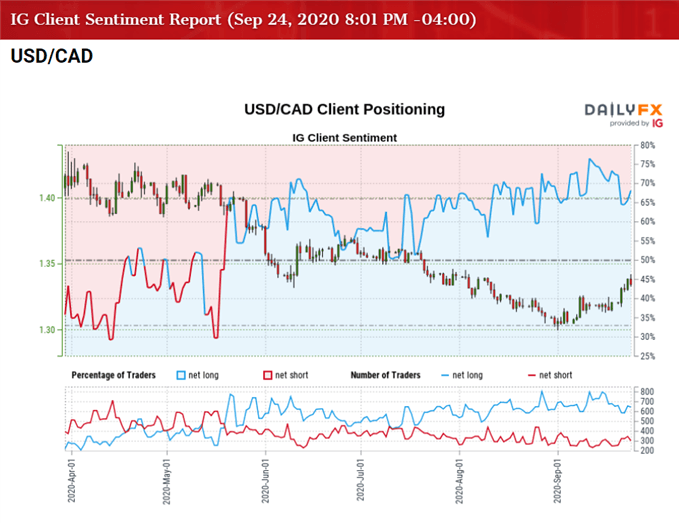 The decline in net-long position could be a function of profit-taking behavior as USD/CAD trades to a fresh monthly high (1.3418), while the rise in net-short position has helped to alleviate the tilt in retail sentiment as 68.59% of traders were net-long USD/CAD earlier this week.

Nevertheless, the crowding behavior in USD/CAD may carry into the end of the month even though the Fed plans to “achieve inflation that averages 2 percent over time,” and the exchange rate may continue to search to resistance as long as the Relative Strength Index (RSI) tracks the upward trend established in September.