USD/CAD trades in a narrow range following the failed attempt to test the March/June low (1.3315), but the Federal Reserve interest rate decision may sway the exchange rate as the central bank is scheduled to release the updated Summary of Economic Projections (SEP).

USD/CAD pulled back from the monthly high (1.3259) as the Bank of Canada (BoC)pledged to carry out its “large-scale asset purchases of at least $5 billion per week,” and it seems as though the central bank will retain the current policy throughout the remainder of the year as Governor Tiff Macklem and Co. expect the “strong reopening phase to be followed by a protracted and uneven recuperation phase.”

The Federal Open Market Committee (FOMC) may follow a similar approach as the central bank mulls an outcome-based approach versus a calendar-based forward guidance for monetary policy, and more of the same from Chairman Jerome Powell and Co. may generate a limited market reaction as the committee vows to “increase its holdings of Treasury securities and agency residential and commercial mortgage-backed securities at least at the current pace.”

It remains to be seen if the Summary of Economic Projections (SEP) will indicate a looming shift in the monetary policy outlook as the Federal Reserve plans to “achieve inflation that averages 2 percent over time,” and the update may produce headwinds for the US Dollar if the interest rate dot-plot shows a downward revision in the longer-run forecast for the Fed Funds rate.

Meanwhile, the crowding behavior in USD/CAD persists ahead of the FOMC rate decision even though the Fed’s balance sheet climbs back above $7 trilling in August, with retail traders net-long the pair since mid-May. 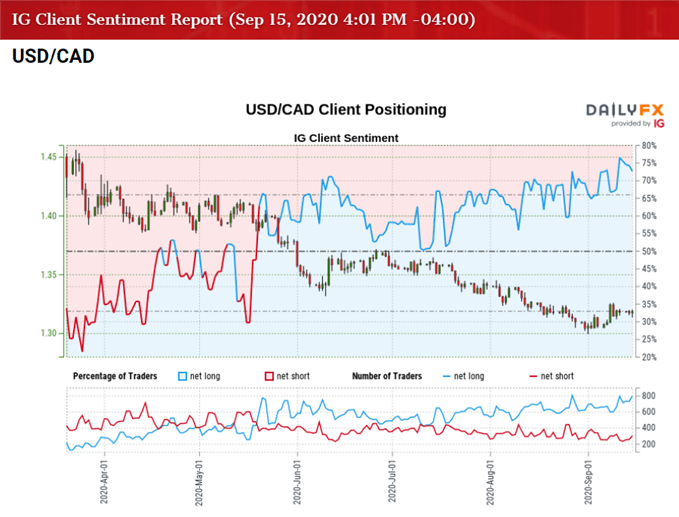 The rise in net-short position comes following the failed attempt to test the March/June low (1.3315), but the pick up in net-long interest suggests the tilt in retail sentiment will persist over the coming days as 61.34% of traders were net-long USD/CAD during the previous week.

With that said, the crowding behavior may continue to coincide with the bearish trend in USD/CAD, and the advance from the monthly low (1.2994) may end up being an exhaustion of the bearish price action rather than a change in market behavior as a bear-flag formation emerges in the DXY index.