The recent rebound in USD/CAD appears to have stalled ahead of the March/June low (1.3315) as the Bank of Canada (BoC) sticks to the sidelines at the September meeting and pledges to carry out its “large-scale asset purchases of at least $5 billion per week.”

USD/CAD quickly pulls back from a fresh monthly high (1.3259) as the BoC insists that “the bounce-back in activity in the third quarter looks to be faster than anticipated in July,” with the central bank going onto say that “core funding markets are functioning well, and this has led to a decline in the use of the Bank’s short-term liquidity programs.”

Nevertheless, the BoC asserts that “QE program will continue until the recovery is well underway and will be calibrated to provide the monetary policy stimulus needed to support the recovery and achieve the inflation objective.”

The comments suggests Governor Tiff Macklem and Co. are in no rush to alter the path for monetary policy as “both the global and Canadian economies are evolving broadly in line with the scenario in the July Monetary Policy Report (MPR),” and it seems as though the BoC will utilize its current policy tools throughout the remainder of the year as the central bank expects the “strong reopening phase to be followed by a protracted and uneven recuperation phase.”

In turn, current market trends may keep USD/CAD under pressure ahead of the Federal Reserve interest rate on September 16 as the BoC sticks to the status quo, and it seems as though the crowding behavior in the US Dollar will also persist over the coming days as retail traders have been net-long USD/CAD since mid-May. 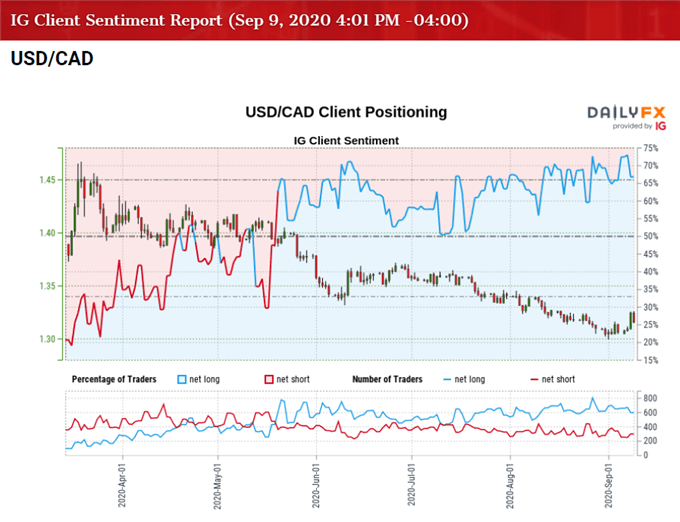 The rise in net-short position has helped to alleviate the tilt in retail sentiment as 68.62% of traders were net-long USD/CAD ahead of the BoC meeting, while decline in net-long interest could be a result of stop-loss orders being triggered as the exchange rate quickly pulls back from a fresh monthly high (1.3259).

With that said, the recent rebound in USD/CAD appears to have stalled ahead of the March/June low (1.3315) as it struggles to extend the series of higher highs and lows from earlier this week, and the advance from the monthly low (1.2994) may end up being an exhaustion of the bearish trend rather than a change in market behavior as a bear-flag formation emerges in the DXY index.