AUD/USD may continue to retrace the decline from the 2020 high (0.7414) as the RBA Minutes suggest the central bank will rely on its current tools to support the economic recovery, and Governor Philip Lowe and Co. may stick to the sidelines after tweaking the Term Funding Facility in September as “members agreed that the Board's policy package implemented in mid March was continuing to support the Australian economy.”

It seems as though the RBA is in no rush to deploy additional monetary measures even though the Governor Lowe and Co. “consider how further monetary measures could support the recovery” as the central bank relies on its yield-target program, with the board insisting that “further purchases should be undertaken as necessary to maintain the target.”

In turn, it remains to be seen if the update the Australia’s Employment report will influence the monetary policy outlook as the economy is expected to shed 50K jobs in August, but the macroeconomic environment may keep AUD/USD afloat ahead of the next RBA rate decision on October 6 as the Federal Reserve plans to “achieve inflation that averages 2 percent over time.”

As a result, the update to the Summary of Economic Projections (SEP) may sway the near-term outlook for AUD/USD if the interest rate dot-plot may shows a downward revision in the longer-run forecast, but more of the same from the June meeting may spark a limited reaction as Chairman Jerome Powell and Co. vow to “increase its holdings of Treasury securities and agency residential and commercial mortgage-backed securities at least at the current pace.”

Looking ahead, current market trends may remain in place as the RBA rules out a negative interest rate policy (NIRP) for Australia, and the crowding behavior in AUD/USD may carry into the end of the month as retail traders have been net-short the pair since April. 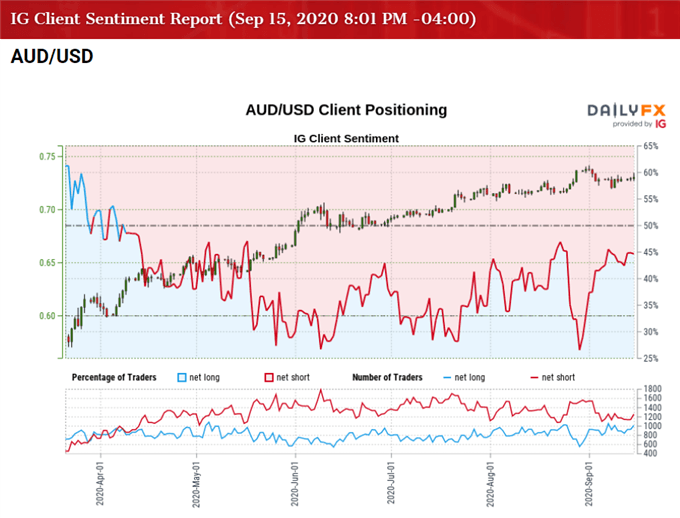 The recent rise in net-long position has helped to alleviate the tilt in retail sentiment as only 41.74% of traders were net-long AUD/USD earlier this week, but the crowding behavior looks poised to persist even though the exchange rate trades to a fresh yearly (0.7414) high in September.

With that said, AUD/USD may continue to exhibit a bullish trend as it reverses course ahead of the 50-Day SMA (0.7176), and the Relative Strength Index (RSI) may show the bullish momentum gathering pace as it climbs towards overbought territory.