The Reserve Bank of Australia (RBA) Minutes may influence AUD/USD ahead of the Federal Reserve interest rate decision on September 16 as Governor Philip Lowe and Co. “consider how further monetary measures could support the recovery.”

AUD/USD appears to be stuck in a narrow range after reversing ahead of the 50-Day SMA (0.7162), but fresh remarks from the RBA may rattle the rebound from the monthly low (0.7192) as the central bank warns that the economic recovery is “likely to be both uneven and bumpy.”

Hints of additional monetary support may produce a bearish reaction in the Australian Dollar as the RBA insists that “the yield target will remain in place until progress is being made towards the goals for full employment and inflation,” and the central bank may show a greater willingness to expand the scope of its emergency tool as “further purchases will be undertaken as necessary.”

However, it remains to be seen if the RBA Minutes will reveal a shift in the forward guidance as the central bank rules out a negative interest rate policy (NIRP) for Australia, and more of the same from Governor Lowe and Co. may prop up AUD/USD ahead of the Federal Open Market Committee (FOMC) rate decision as current market trends remain in place. 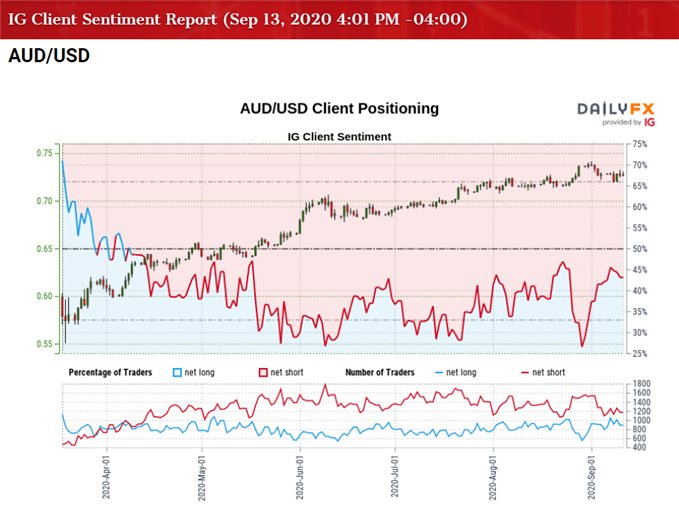 Net-long interest appears to be holding steady as AUD/USD trades in a narrow range after reversing ahead of the 50-Day SMA (0.7162), but the rise in net-short position suggests the crowding behavior in the US Dollar will persist even though the Federal Reserve’s balance sheet climbs back above $7 trillion in August.

With that said, AUD/USD may continue to exhibit a bullish trend as it trades to a fresh yearly high (0.7414) in September, but the 50-Day SMA (0.7162) remains on the radar as the exchange rate threatens the upward trend established in late-June.