USD/CAD trades to a fresh monthly high (1.3258) ahead of the Bank of Canada (BoC) interest rate decision as there appears to be a shift in risk appetite, and the exchange rate appears to be on track to test the March/June low (1.3315) for resistance as it initiates a series of higher highs and lows.

USD/CAD breaks out of the range bound price action following Canada’s Employment report as global equity prices come under pressure, and a further shift in investor confidence may fuel a larger recovery in the US Dollar as the NASDAQ 100 and S&P500 sit at a precarious position.

Looking ahead, it remains to be seen if the BoC meeting will influence USD/CAD as the central bank is expected to retain the current policy, and Governor Tiff Macklem and Co. may stick to the same script in September after delivering the updated Monetary Policy Report (MPR) in July.

In turn, the BoC may continue to carry out “its large-scale asset purchase program at a pace of at least $5 billion per week” throughout the remainder of the year, and more of the same from the central bank may undermine the recent rebound in USD/CAD as the Federal Reserve plans to “achieve inflation that averages 2 percent over time.”

At the same time, the crowding behavior in the US Dollar looks poised to persist even though a bear-flag formation emerges in the DXY index, with the retail crowd net-long USD/CAD since mid-May. 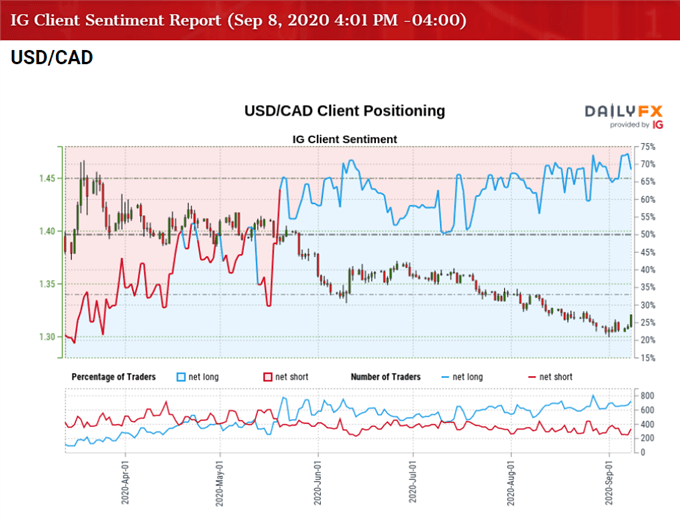 The decline in net-short position could be result of stop-loss orders being triggered as USD/CAD trades to a fresh monthly high (1.3258) ahead of the BoC meeting, while the drop in net-long interest has helped to alleviate the tilt in retail sentiment as 72.36% of traders were net-long the pair earlier this week.

With that said, a further shift in risk appetite may spur a test of the March/June low (1.3315) for resistance as USD/CAD reverses ahead of the January low (1.2957), but the recent rebound in the exchange rate may prove to be an exhaustion in the bearish price action rather than a change in trend as key market themes persist.