EUR/USD appears to be stuck in a narrow range as market participants wait for the Federal Reserve Economic Symposium scheduled for August 27-28, but recent developments in the Relative Strength Index (RSI) warn of a potential shift in market behavior as the indicator establishes a downward trend in August.

EUR/USD is little changed from the start of the week as it struggles to retrace the decline following the Federal Open Market Committee (FOMC) Minutes, and the pullback from the yearly high (1.1966) may turn into a more pronounced correction as the central bank mulls an outcome-based approach versus a calendar-based forward guidance for monetary policy.

It remains to be seen if Fed officials will reveal new information at the economic symposium as the FOMC continues to rule out a yield caps or targets (YCT) policy, but hints of an exit strategy may lead to a material shift in EUR/USD behavior as Chairman Jerome Powell insists that “when the time comes, after the crisis has passed, we will put these emergency tools back in the toolbox.”

On the other hand, the event may indicate more of the same for the next interest rate decision on September 16 as the FOMC appears to be in no rush to scale back the emergency measures, and the macroeconomic environment may keep EUR/USD afloat as the Fed’s balance sheet climbs back above $7 trillion in August.

In turn, current market themes may carry into September as the European Central Bank (ECB) emphasizes that the EUR 1.350 trillion envelope for the pandemic emergency purchase programme (PEPP) “should be considered a ceiling rather than a target,” and the crowing behavior in the US Dollar may also persist in the month ahead as retail traders have been net-short EUR/USD since mid-May. 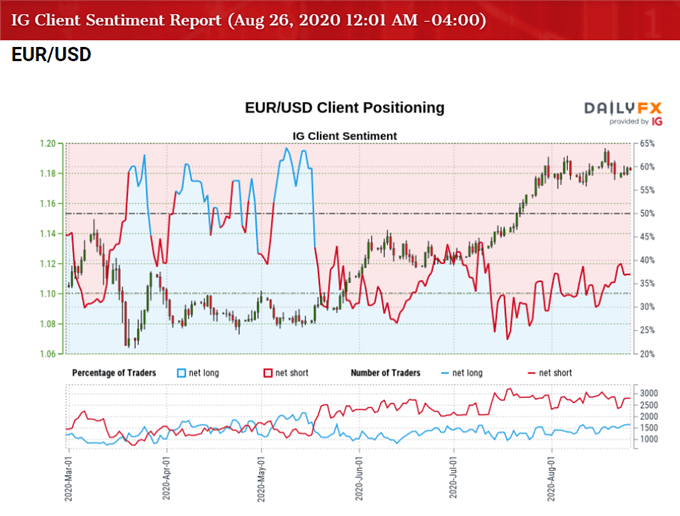 The rise in net-long position comes as the decline following the FOMC Minutes fails to trigger a test of the monthly low (1.1696), while the recent pickup in net-short interest suggests the tilt in retail sentiment will persist over the remainder of the month even though Chairman Powell and Co. vow to “increase its holdings of Treasury securities and agency residential and commercial mortgage-backed securities at least at the current pace.”

With that said, recent developments in the RSI could be indicative of a potential exhaustion in the bullish behavior rather than a change in trend, but EUR/USD may continue to give back the advance from the August low (1.1696) as long as the indicator retains the downward trend established earlier this month.