NZD/USD appears to be stuck in a narrow range as it clings to the rebound from the August low (0.6489), and the exchange rate may continue to consolidate ahead of the Federal Reserve Economic Symposium scheduled for August 27-28 as the Relative Strength Index (RSI) looks to negate the downward trend established earlier this month.

NZD/USD continues to trade within the July range as itpares the decline following the Federal Open Market Committee (FOMC) Minutes, and it remains to be seen if Chairman Jerome Powell and Co. will use the economic symposium as a platform to guide market expectations as Fed officials discuss an outcome-based approach versus a calendar-based forward guidance for monetary policy.

Recent actions by the FOMC suggest the central bank is in no rush to scale back its emergency measures as the committee votes unanimously to push back “the expiration of the temporary U.S. Dollar liquidity swap lines through March 31, 2021,” and the event may help to keep NZD/USD afloat if Fed officials signal more of the same for the next interest rate decision on September 16.

On the other hand, indications of a looming shift in the Fed’s forward guidance may drag on NZD/USD as the FOMC continues to rule out a yield caps or targets (YCT) policy, and hints of an exit strategy may ultimately lead to a material shift in market behavior as the central bank calls on Congress, with some Fed officials insisting that “due to the nature of the shock that the U.S. economy was experiencing, strong fiscal policy support would be necessary to encourage expeditious improvements in labor market conditions.”

Until then, NZD/USD may trade within a more defined range as it remains little changed from the start of the week, but the crowding behavior in the US Dollar looks poised to persist over the remainder of the month as retail traders have been net-short the pair since mid-June. 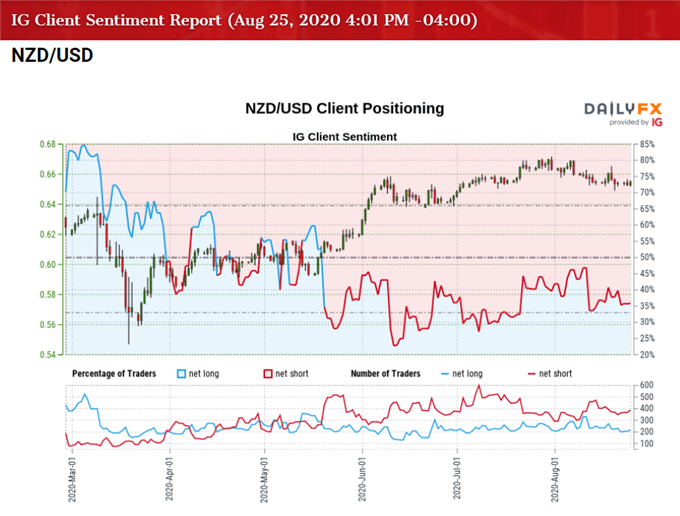 The decline in net-long position could be a result of stop-loss orders getting triggered as NZD/USD slipped to a fresh monthly low (0.6489) following the FOMC Minutes, while the rise in net-short interest suggests the crowding behavior in the Greenback will carry into September even though the Fed’s balance sheet climbs back above $7 trillion in August.

With that said,current market conditions may keep NZD/USD afloat as it trades within the July range, but the exchange rate may continue to consolidate ahead of the Federal Reserve Economic Symposium as the Relative Strength Index (RSI) threatens the downward trend established earlier this month.