NZD/USD appears to be stuck in a narrow range following the failed attempts to test the January high (0.6733), and the exchange rate may continue to consolidate ahead of the Reserve Bank of New Zealand (RBNZ) interest rate decision as the central bank is expected to keep the official cash rate (OCR) at the record low of 0.25%.

NZD/USD struggles to retain the advance from the start of the month even though the crowding behavior in the US Dollar persist, and lack of momentum to take out the July high (0.6716) may keep the exchange rate under pressure as the Relative Strength Index (RSI) appears to be deviating with price, with the indicator establishing a bearish trend following the extreme reading in June.

Looking ahead, the RBNZ rate decision my influence NZD/USD as the central bank plans to “outline the outlook for the LSAP (Large Scale Asset Purchase) programme and our readiness to deploy alternative monetary policy tools in our August Statement,” and a batch of dovish comments may produce a bearish reaction in the New Zealand Dollar central bank remains “prepared to provide additional stimulus as necessary.”

It seems as though the RBNZ will rely on its current tools to support the economy as “the existing LSAP programme is continuing to ease monetary conditions,” but the central bank may show a greater willingness to expand the size and scope of its asset purchases as “the Committee agreed that it is not yet clear whether the monetary stimulus delivered to date is sufficient to meet its mandate.”

The RBNZ may emphasize that “Committee continues to prepare for the use of additional monetary policy tools as needed,” and negative interest rates may continue to be an option for the central bank as Chief Economist Yuong Hapublicized that “we’ve given the banking system until the end of the year to get ready so that the option is there for the Monetary Policy Committee (MPC) in a year’s time.”

In turn, the RBNZ may prepare New Zealand households and business for additional monetary support as risks to the economic outlook “remain skewed to the downside,” and a dovish forward guidance may drag on NZD/USD as the Federal Reserve carries out a wait-and-see approach for monetary policy.

On the other hand, an unexpected shift in the RBNZ’s language may trigger a bullish reaction in the New Zealand Dollar if Governor Adrian Orr and Co. highlight a material change in the future path for monetary policy, and it remains to be seen if the rate decision will impact the crowding behavior in the US Dollar as retail traders have been net-short NZD/USD since mid-June. 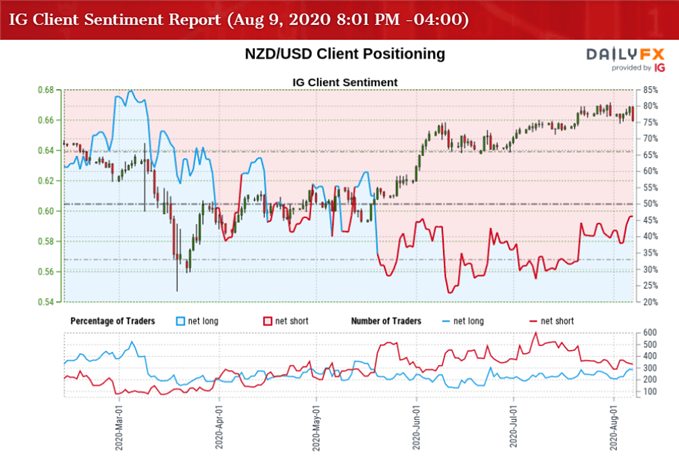 The recent decline in retail interest comes as NZD/USD appears to be stuck in a narrow range, but the rise in net-long positions may continue to lift the IG Client Sentiment index from the extreme reading registered in June even though the exchange rate marks a string of failed attempt to test the January high (0.6733).

With that said, lack of momentum to take out the July high (0.6716) may keep NZD/USD under pressure, and the Relative Strength Index (RSI) may continue to establish a downward trend over the coming days as it reverses course following the string of failed attempts to push into overbought territory.