The price of gold continues to consolidate ahead of the Federal Reserve interest rate decision in July 31, but the looming shift in US monetary policy may heighten the appeal of the precious metal as market participants look for an alternative to fiat currencies.

The Federal Open Market Committee (FOMC) appears to be on track to insulate the US economy from the shift in trade policy as the Trump administration struggles to reach an agreement with China.

The latest speech from Fed Chairman Jerome Powell suggests the central bank will switch gears as “many participants indicated that the case for somewhat more accommodative policy had strengthened,” and the central bank may come under increased pressure to reverse the four rate hikes from 2018 as President Donald Trump tweets that “a small rate cut is not enough.”

It remains to be seen if the FOMC will establish a rate easing cycle as “the labor market was likely to remain strong with economic activity growing at a moderate pace,” and the committee may ultimately vote for an ‘insurance cut’ as the fresh updates to the US Gross Domestic Product (GDP) report show little signs of an imminent recession. 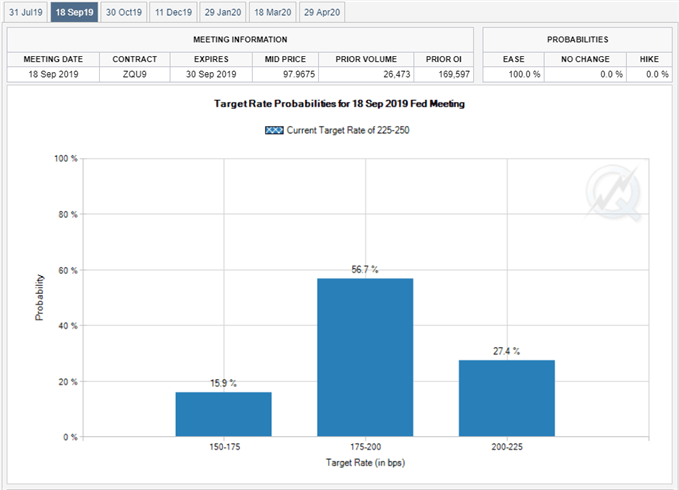 However, Fed Fund futures reflect expectations for more than one rate-cut in 2019, with market participants currently pricing a greater than 70% probability for another reduction at the September 18 interest rate decision.

In turn, the Fed’s forward guidance for monetary policy is likely to impact the near-term outlook for gold, but the threat of a policy error may push investors to hedge against fiat currencies as there appears to be a flight to safety.

With that said, gold prices may exhibit a more bullish behavior over the coming days, and the precious metal looks poised to extend the advance from the monthly-low ($1382) as it breaks out of a holding pattern.