Gold prices appear to be stuck in a holding pattern as US Treasury Secretary Steven Mnuchin intends to hold a call with Chinese officials this week, but current market conditions may keep the precious metal afloat as the Federal Open Market Committee (FOMC) is widely expected to shift gears later this month.

The price of gold continues to give back the advance from the monthly-low ($1382) as the US Retail Sales report beats market expectations, with private-sector spending expanding 0.4% in June versus expectations for a 0.2% rise.

Developments coming out of the US may continue to drag on bullion as President Donald Trump tweets “China wants to make a deal,” but the looming change in monetary policy may have a greater impact in dictating gold prices as the Federal Reserve appears to be on track to insulate the economy from the shift in trade policy.

Fed Chairman Jerome Powell continued to endorse a dovish forward guidance in a recent speech, with the central bank head stating that “many FOMC participants judged at the time of our most recent meeting in June that the combination of these factors strengthens the case for a somewhat more accommodative stance of policy.” 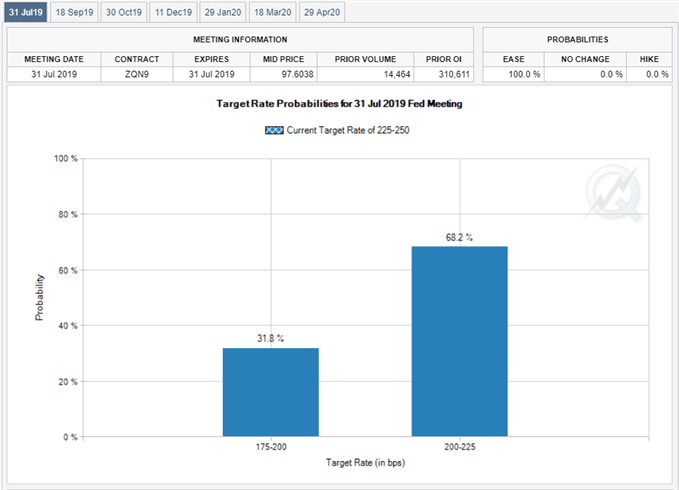 The comments reinforce expectations for an imminent change in monetary policy as Fed Fund futures highlight a 100% probability for at least a 25bp rate cut on July 31, and the central bank may continue to change its tune over the coming months as the US and China struggle to reach a trade deal.

However, it remains to be seen if the FOMC will establish a rate easing cycle as the US economy shows little signs of a recession, and the committee may revert back to a wait-and-see approach after delivering an “insurance cut” as Chairman Powell and Co. “expect growth in the United States to remain solid, labor markets to stay strong, and inflation to move back up and run near 2 percent.”

With that said, gold prices may continue to benefit from the current environment amid the threat of a policy error, and the price of bullion may exhibit a more bullish behavior over the remainder of the year as market participants look for an alternative to fiat currencies.