The price of gold pulls back from a fresh yearly high ($1453) after breaking out of a short-term holding pattern, but current market conditions may keep gold prices afloat as market participants look to hedge against fiat currencies.

The price of gold carves a fresh series of higher highs and lows as talks between US Treasury Secretary Steven Mnuchinand Chinese officials yield little signs of an imminent trade deal, and the precious metal may stage a larger advance ahead of the Federal Reserve interest rate decision on July 31 as the central bank comes under increased pressure to alter monetary policy.

It seems as though the Federal Open Market Committee (FOMC) will shift gears as Chairman Jerome Powell largelyendorses a dovish forward guidance, and the central bank may show a greater willingness to reverse the four rate hikes from 2018 as President Donald Trump tweets that “the Fed raised far too fast & too early.” 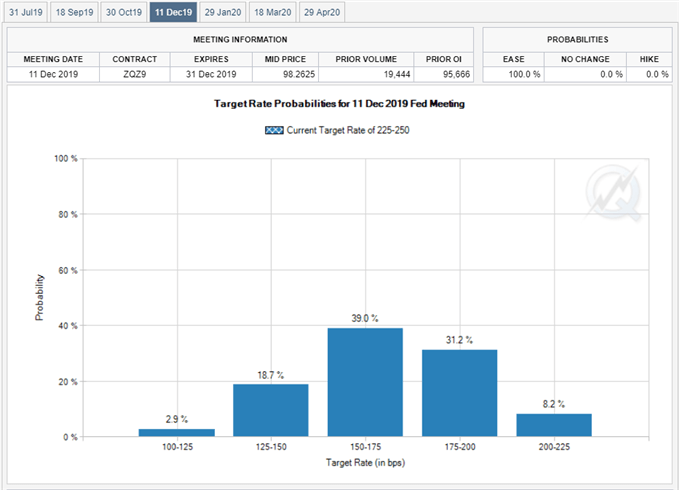 In turn, Fed Fund futures continue to show a 100% probability for at least a 25bp rate cut at the end of this month, but it seems as though market participants are bracing for a more accommodative stance as the benchmark interest rate is seen falling towards the 1.50% to 1.75% threshold in December.

It remains to be seen if Chairman Powell and Co. will establish a rate easing cycle as Boston Fed President Eric Rosengren, a 2019-voting member on the FOMC, insists that the “the economy’s doing actually quite well” and argues that the “we don’t need accommodation” as incoming data shows little signs of a looming recession.

With that said, the FOMC may vote for an “insurance cut” as the US and China struggle to reach a trade deal, but gold prices may continue to benefit from the current environment, and market participants may persistently look for an alternative to fiat-currencies amid the threat of a currency war.

In turn, gold prices may exhibit a more bullish behavior over the coming days, with the precious metal at risk of extending the advance from the monthly-low ($1382) as it breaks out of a triangle/wedge formation.