Oil Price Weakness to Persist Amid Signs of Slowing Consumption

The price of crude extends the decline from the monthly-high ($60.94) even though US crude inventories contract for the fifth consecutive week, with oil prices at risk of exhibiting a more bearish behavior over the coming days as a ‘death-cross’ formation takes shape in July.

Oil Price Weakness to Persist Amid Signs of Slowing Consumption

US crude inventories narrowed 3116K in the week ending July 12, but the details of the report showed gasoline inventories unexpectedly climbing 3565K during the same period, with stockpiles of distillate fuel climbing 5685K after expanding 3729K the week prior.

Signs of lower consumption may put pressure on the Organization of the Petroleum Exporting Countries (OPEC) and its allies to step up their efforts as the mere extension of the ‘Declaration of Cooperation’ fails to prop up the price of crude, and the group may have little choice but to further reduce crude outputs over the coming months especially as the US and China struggle to reach a deal. 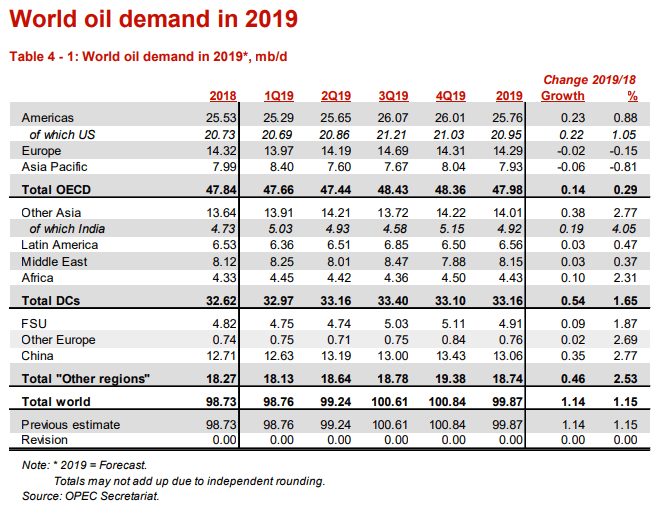 It remains to be seen if OPEC and its allies will adjust production ahead of the next meeting on December 5 as the most recent Monthly Oil Market Report (MOMR) states that “in 2019, the global oil demand growth forecast remains at 1.14 mb/d, with expectations for global oil demand to reach 99.87 mb/d.”

The update suggests OPEC and its allies are in no rush to respond to the weakening outlook for global growth, and current market conditions may keep crude under pressure, with the price of oil still at risk of facing a bear market as a ‘death-cross’ formation takes shape.