Gold prices have marked the biggest single day decline for 2019, with bullion at risk of facing a larger correction as the Relative Strength Index (RSI) falls back from overbought territory and flashes a textbook sell-signal.

The price of gold continues to pullback from the 2019-high ($1439) as fresh developments coming out of the US economy show little to no evidence of a looming recession.

Updates to the ISM Manufacturing survey showed business confidence narrowing for the third consecutive month in June, but a deeper look at the report revealed an uptick in the Employment component, with the gauge climbing to 54.5 from 53.7 during the same period.

The figures bode well for the US Non-Farm Payrolls (NFP) report on tap for later this week as the economy is anticipated to add another 164K jobs in June, but the ongoing improvement in the labor market may do little to impact the monetary policy outlook as the Federal Reserve appears to be on track to switch gears over the coming days. 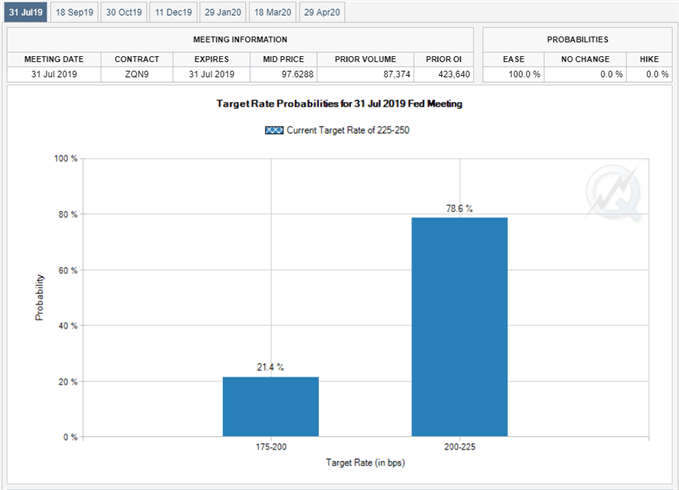 Fed Fund futures continue to reflect a 100% probability for a 25bp reduction on July 31 as the Federal Open Market Committee (FOMC) adjusts the forward guidance for monetary policy, and the central bank may come under pressure to insulate the economy from the ongoing shift in US trade policy as the Trump administration relies on tariffs to pushes its agenda.

It remains to be seen if the FOMC will reverse the four rate hikes from 2018 as Fed Vice-Chairman Richard Clarida insist that the central bank will “act as appropriate,” and it seems as though the committee is in no rush to implement a rate cutting cycle as “the unemployment rate is near a 50-year low, and inflation is running close to our 2 percent objective.”

With that said, upcoming changes in US monetary policy are likely to keep gold prices afloat especially as eight Fed officials project a lower trajectory for the benchmark interest rate, but recent price action raises the risk for a larger pullback as the bullish momentum abates.