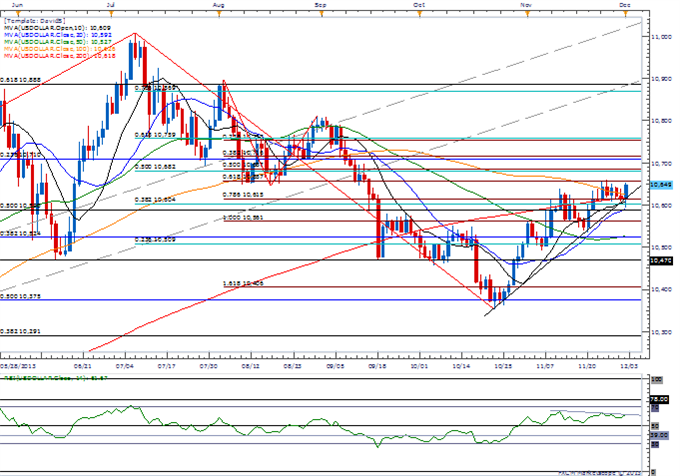 The Dow Jones-FXCM U.S. Dollar Index (Ticker: USDollar) made another run at the 50.0 percent Fibonacci retracement (10,590) following the better-than-expected ISM Manufacturing report, and reserve currency could be coiling up for a move higher as it preserve the bullish trend dating back to October.

Indeed, the dollar may extend the advance from the previous month as the Relative Strength Index appears to be breaking out of the bearish formation, and the fundamental developments coming out of the U.S. economy may continue to prop up the greenback should it raise the Fed’s scope to taper the asset-purchase program at the December 17-18 meeting.

However, the dollar may continue to face range-bound prices as market participants turn their attention Non-Farm Payrolls on tap for later this week, and the employment report may seal the dollars fate ahead of the Fed’s interest rate decision as the central bank sticks by its forward-guidance for monetary policy. 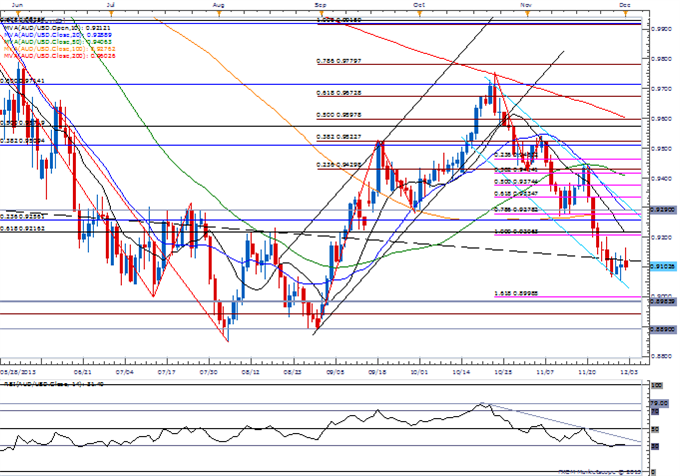 The dollar strengthened across the board, led by a 0.60 percent decline in the Japanese Yen, while the Australian dollar shed 0.04 percent ahead of the Reserve Bank of Australia (RBA) interest rate decision even as the central bank is widely expected to keep the benchmark interest rate at 2.50 percent in December.

Despite the threat to intervene in the currency market, Governor Glenn Stevens may take a similar approach to its New Zealand counterpart and try to limit the upside for the Australia dollar, but the RBA may have little choice but to implement additional rate cuts over the coming months as Treasurer Joe Hockey delays the A$ 8.8B injection for the central bank.

In turn, the ongoing weakness in the $1T economy may continue to limit the topside for the AUDUSD, and the pair may face additional headwinds over the next 24-hours of trading should the RBA show a greater willingness to push the cash rate to a fresh record-low.