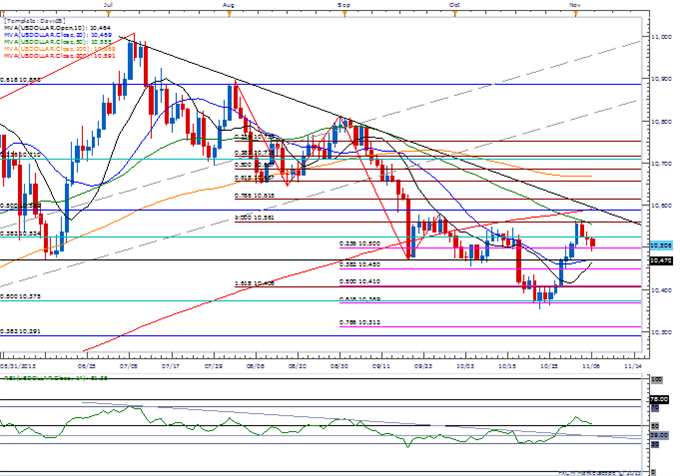 - USDOLLAR Fails to Hold Range Ahead of 3Q GDP Report

The Dow Jones-FXCM U.S. Dollar Index (Ticker: USDollar) is struggling to hold its ground ahead of the advance 3Q GDP report as the world’s largest economy faces a slowing recovery, and a marked slowdown in the growth rate may prompt a near-term selloff in the reserve currency as it dampens the Fed’s scope to taper the asset-purchase program.

It seems as though the USD carved out a lower high this month amid the failed attempts to close above the 100.0 percent Fibonacci expansion around 10,561, and the bearish trend may continue to take shape over the near-term as the fundamental developments coming out of the region raises the risk of seeing the Federal Open Market Committee (FOMC) carry its highly accommodative policy stance into the following year.

In turn,a batch of dismal data prints may pave the way for a lower low in the dollar index, and the reserve currency may face additional headwinds over the remainder of the year as the fiscal drag continues to dampen the outlook for growth and inflation. 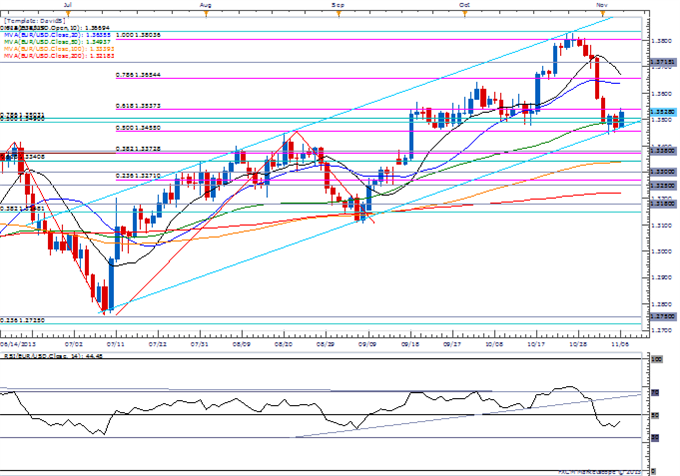 Three of the four components rallied against the greenback, led by a 0.42 percent rise in the Euro, and headlines surrounding the European Central Bank (ECB) interest rate decision may continue to prop up the single currency as market participants scale back bets of seeing a more dovish statement tomorrow.

However, ECB President Mario Draghi may implement his own style of verbal intervention as European officials argue for a weaker currency, and the Governing Council may show a greater willingness to further embark on its easing cycle as the outlook for growth and inflation remains subdued.

In turn, the EURUSD may continue to threaten the bullish trend, and we will look for a close below the 1.3455 region to favor downside objectives for the pair.