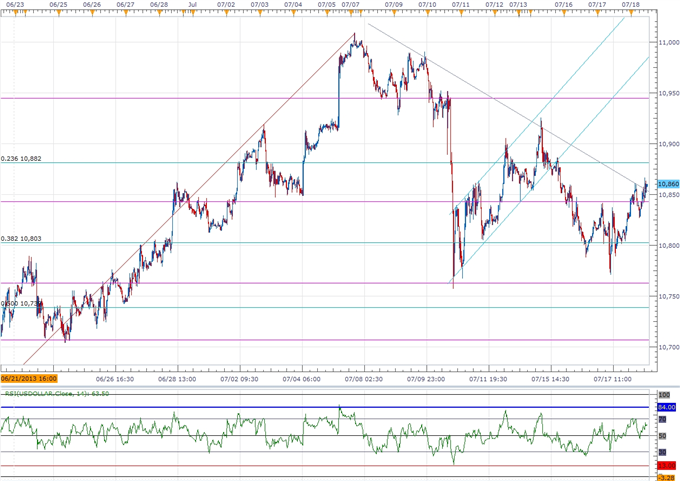 The Dow Jones-FXCM U.S. Dollar Index (Ticker: USDollar) is trading 0.60 percent lower from the open as U.S. Existing Home Sales slipped 1.2% in June amid forecasts for a 1.5% rise, and the near-term correction in the greenback may continue to take shape ahead of the next Federal Open Market Committee (FOMC) interest rate decision on July 31 amid the growing discussion at the central bank to taper the asset-purchase program. As the reserve currency breaks below the 61.8 percent Fibonacci expansion around 10,764, the dollar looks poised for a larger correction, but we may see a correction over the next 24-hours of trading as the 30-minute relative strength index pushes deep into oversold territory. Nevertheless, we will look to buy into USD weakness amid the shift in the policy outlook, and we should see the dollar appreciate further over the remainder of the year as the Fed slowly moves away from its easing cycle. 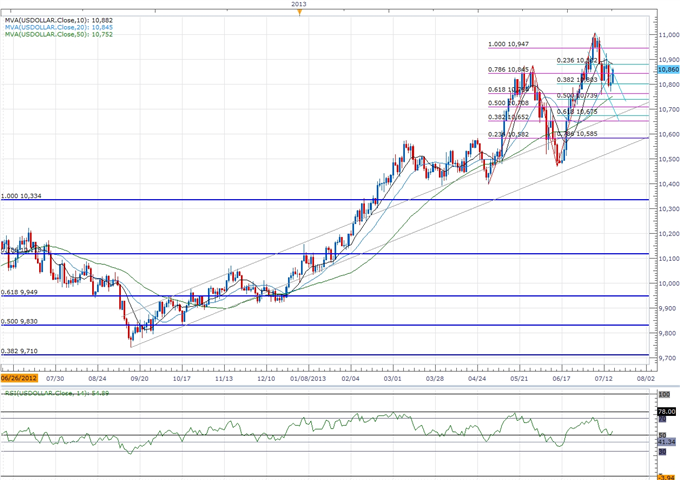 Although we’re seeing the USDOLLAR continue to trade within the downward trending channel from earlier this month, we anticipate the broader bullish flag pattern to take shape in the days ahead, and we will maintain our game plan to buy dips in the greenback amid the shift in the policy outlook. Nevertheless, as the greenback pierces below the 50-Day SMA (10,757), the index looks poised for a move towards the 50.0 percent Fib around 10,739, but the 50.0 percent expansion at 10,708 may come into play should we see the fundamental developments coming out of the U.S. economy continue to fall short of market expectations. In turn, we may see a broader correction in the days ahead, but we may see the FOMC conclude its easing cycle ahead of schedule should we see a stronger recovery in the second-half of the year.

The greenback weakened across the board, led by a 1.11 percent advance in the Japanese Yen, but the near-term decline in the USDJPY may be short-lived as the pair appears to be forming a new bullish trend. Although Prime Minister Shinzo Abe gained greater control over the upper house of parliament, the Liberal Democratic Party (LDP) and its coalition failed to secure a 2/3 majority, and the new composition may do little to alleviate pressures on the Bank of Japan (BoJ) to further embark on its easing cycle as Japanese lawmakers look to encourage a stronger recovery. Should Mr. Abe struggle to implement further reforms, BoJ Governor Haruhiko Kuroda may have little choice but to layout more non-standard measures for the world’s third-largest economy, and the series of higher highs paired with higher lows should continue to take shape over the near to medium-term amid the deviation in the policy outlook.