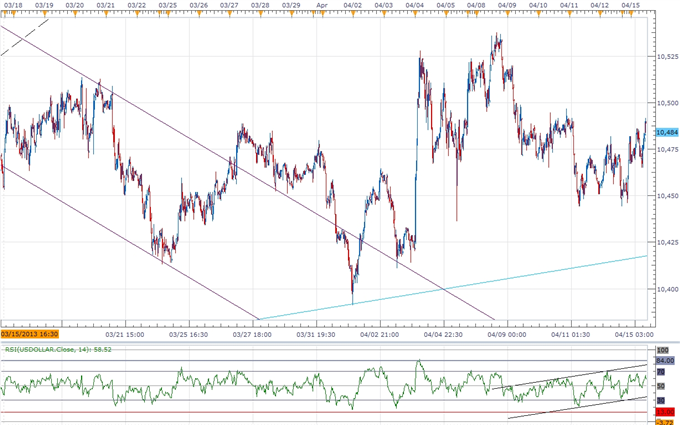 The Dow Jones-FXCM U.S. Dollar Index (Ticker: USDollar) is trading 0.29 percent higher from the open after moving 91 percent of its average true range, and the greenback may continue to pare the decline from earlier this month as the reserve currency carves out a short-term base around the 10,400 region. Indeed, there appears to be a bullish divergence amid the upward trend channel in the relative strength index, but the greenback may face a small correction over the next 24-hours of trading as the oscillator approaches overbought territory. Nevertheless, we may see the bullish sentiment surrounding the USD gather pace ahead of the G20 meeting scheduled for April 18-19 amid the negative headline coming out of the euro-area, and the dollar may appreciate further in the days ahead as the flight to safety returns. 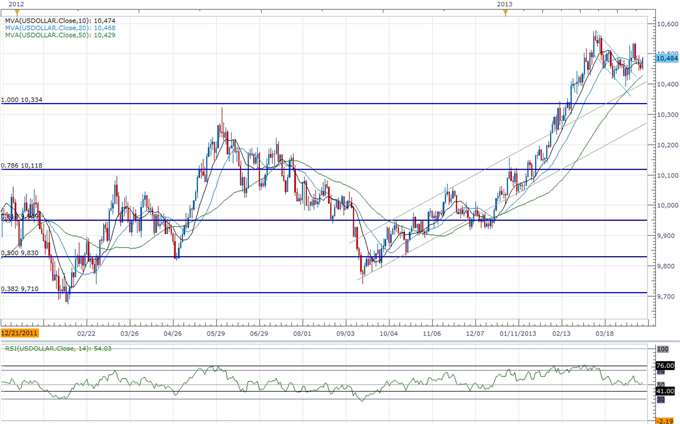 Although European Central Bank President Mario Draghi pledged to support the euro-area within its mandate, the central bank head argued that monetary policy cannot address the root cause of the crisis, and the persistent threat for contagion may continue to increase the appeal of the USD as the governments operating under the monetary union struggle to get their house in order. As a growing number of Fed officials take note of a more broad-based recovery, the Beige Book on tap for later this week may sound more upbeat this time around, and the shift in the policy outlook may produce another run at the 10,600 figure as the FOMC looks to scale back on quantitative easing. In turn, we should see the bullish flag formation continue to pan out, but the Fed may continue to support its highly accommodative policy stance throughout the first-half of 2013 as the headline reading for U.S. inflation is expected to slow to an annualized 1.6% from 2.0% in February.

Three of the four components weakened against the greenback, led by a 1.01 percent decline in the Australian dollar, and the higher-yielding currency may continue to give back the rebound from March (1.0114) as the outlook for growth deteriorates. Indeed, the weaker-than-expected GDP report out of China – Australia’s largest trading partner – pushed the AUDUSD down to 1.0375, and we may see the Reserve Bank of Australia show a greater willingness to push the benchmark interest rate to a fresh record-low as the recourse boom comes to an end. As the AUDUSD makes another failed run at the 1.0600 region, the pair looks poised to preserve the downward trend dating back to 2011, and we will look to sell rallies in the exchange rate as the relative strength index remains capped by a the 67 figure.