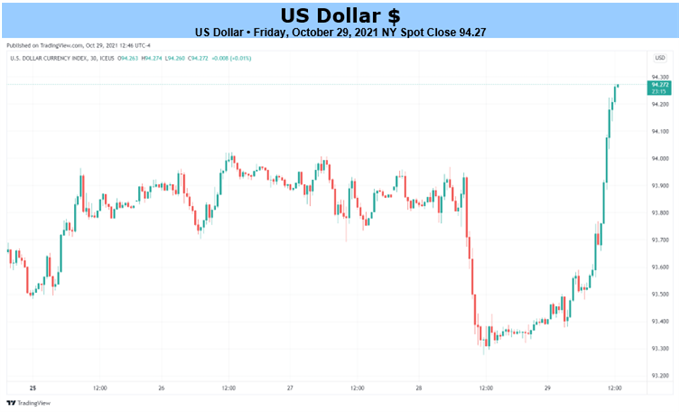 The US Dollar strengthened towards the end of last week as the yield curve flattened, likely reflecting rising hawkish Federal Reserve monetary policy expectations. This followed a week where US GDP slowed faster than expected in the third quarter. Meanwhile, the Fed’s preferred inflation gauge, core PCE, remained well above the central bank’s target.

All eyes now turn to the November FOMC monetary policy announcement due on Wednesday. Following a shift in the central bank’s tone on inflation, the monthly asset purchase tapering is expected to begin. This is anticipated at a pace of US$10 trillion per month, which is expected to be completed by June 2022. How soon will rate hikes follow though?

Since September’s FOMC rate decision, the markets have been increasingly pricing in a more hawkish Fed. Now, Fed Fund Futures reflect that the markets anticipate 2 rate hikes by the end of 2022. Prior to the September policy announcement, not even one rate hike was fully priced in. Earlier in October, Fed Chair Jerome Powell noted that the risks are tilted higher on inflation.

Still, despite the rapid increase in Fed rate hike bets, the US Dollar has struggled against its major peers. There may be 2 key reasons why. The first can be found on the chart below. The average spread between the 10-year Treasury yield and equivalent bonds from developed countries has been narrowing. This means longer-term rates have been rising more quickly outside of the United States.

This seemingly makes sense. In countries like Australia, New Zealand and Canada central banks have all either finished tapering QE or have started it. It is no surprise to see AUD, NZD and CAD as some of the best performing major currencies against USD over the past month. With that in mind, a hawkish Fed could allow for US long-term rates to outperform, opening the door for Greenback strength.

Another factor pressuring the US Dollar could be found in stock markets. Global equities have managed to maintain upside momentum despite rising hawkish central bank policy bets. The Dow Jones, S&P 500 and Nasdaq 100 recently set new highs. This dynamic bodes ill for the haven-linked USD. Still, a revival in volatility could be in the cards if a hawkish Fed fuels investors to book profits and/or reshuffle their capital.

The week will also wrap up with October’s non-farm payrolls report. Markets may pay closer attention to wage data, which can have inflationary impacts on the economy. Average hourly earnings are expected to shoot higher to 4.9% y/y from 4.6% prior. This is still well above pre-pandemic trends and may influence the timing of Fed rate hikes down the road. On balance, the risks seem tilted to the upside for USD.