US Dollar May Rebound as Financial Markets Face Global Recession 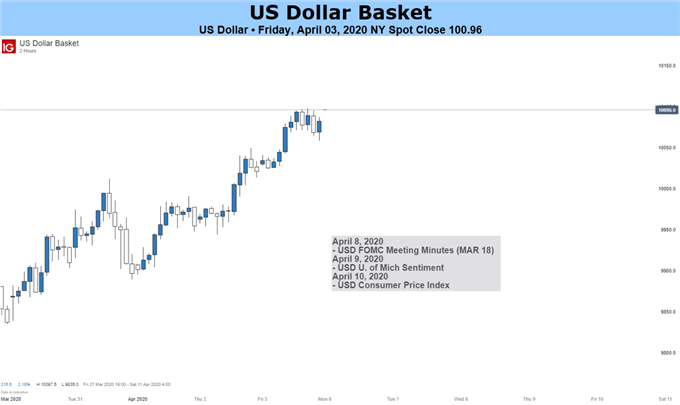 US Dollar price action has been animated by a single theme in recent weeks. A rapid contraction in global economic growth amid nearly worldwide lockdown to contain the Covid-19 outbreak has echoed in a rush for cash as capital flees comparatively riskier cyclical assets in search of safety and liquidity.

The indisputably dominant reserve currency has understandably thrived against this backdrop, paying no mind to exuberant Fed monetary stimulus that might have otherwise sent it reeling. The week is likely to remain consumed with the same narrative as the pandemic continues to burn hot.

The tone for what’s to come may well depend on whether the Fed’s new FIMA repo facility is well-received when it opens for business Monday. It allows foreign central banks to temporarily flip their holdings of US Treasuries into cash, creating a vast stop-gap liquidity supply to keep credit markets lubricated.

The Greenback will probably retreat if this is successful as scarcity risk abates. However, even the promise of open-ended QE has only managed to stop the surge in short-term lending rates. The Fed’s new tool may fare in kind: it is a useful backstop that helps prevent a credit crunch, but it is unlikely to revive growth.

This is because cheap capital and subsidized purchasing power cannot be deployed in earnest while whole nations are huddling behind closed doors. Containing the virus is almost certainly a prerequisite. That means credit markets are likely to remain stressed, undermining the Fed’s efforts and keeping USD supported.

US CONSUMER CONFIDENCE AND INFLATION DATA, FOMC MEETING MINUTES DUE

On the data front, the University of Michigan gauge of US consumer confidence is projected to put sentiment at the weakest since November 2013. March CPI inflation data is expected to drop to 1.6 percent on-year, marking a nine-month low. Soft outcomes may encourage haven-seeking US Dollar buying.

Minutes from the Fed’s emergency meeting on March 15 are also of note. Markets will carefully parse the document to understand the thinking that drove policymakers to throw the stimulus taps wide open when they did, hoping that this will inform a framework for forecasting future action.