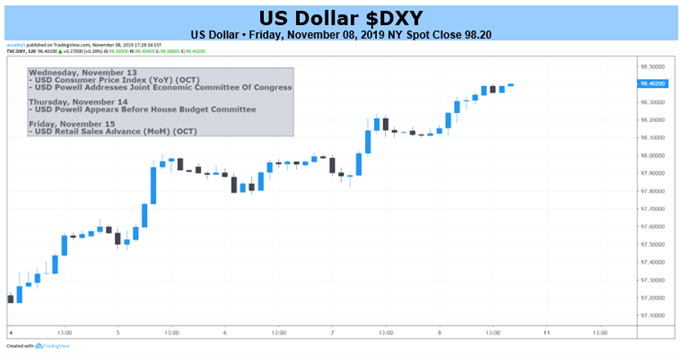 The US Dollar may rise in the week ahead if US CPI and retail sales data show an improvement against the backdrop of cooling Sino-US trade war tensions and reduce the urgency for Fed rate cuts. Commentary from central bank officials throughout the week may amplify this effect if they reinforce the narrative that improving fundamentals lend credence to the Fed’s decision to put a pause on easing credit conditions.

While manufacturing activity has been contracting – in large part due to the US-China trade war – the services sector and consumption has shown resilience. However, this feature is not specific to the US – most OECD countries are experiencing a slowdown in manufacturing. Generally strong labor market conditions have kept the contagion of an industrial slowdown at bay; at least for now.

However, inflationary pressure continues to decline amid a “synchronized slowdown” in global growth and as major economies – like the Eurozone – have their growth outlook downwardly revised. Price growth has been below the Fed’s two percent target, which could tilt the scales towards more accommodative policy measures. As such, traders will be closely watching this indicator for signs of improvement or deterioration.

CPI is Hovering at Around 1.7 Percent Below the Fed’s 2 Percent Target

The next big indicator traders will be watching out for will the publication of retail sales data. The advanced month-on-month figures for October are expecting to show a 0.2 percent increase after the previous reading showed a 0.3 percent decline. A stronger-than-expected figure could push the US Dollar higher if the data convinces traders that fundamentals are improving and the need for liquidity provisions is cooling.

Prior Data Print was Lowest Since February 2019

On Tuesday, investors will be eagerly tuning into US President Donald Trump speech at the Economic Club of New York where he will give a talk on trade which will then be followed by questions. The highly-anticipated event comes as Washington and Beijing are coming increasingly close to signing of “Phase 1” of their multi-sequential trade deal.

Sino-US trade relations have improved with the White House recently announcing they will repeal around $112 billion in Chinese tariffs with more reductions to come with each completed phase of the agreement. However, there are still a myriad of obstacles that threaten to derail the negotiations ranging from differing approaches to the Hong Kong protests and the new leverage China just acquired from the WTO.

On Tuesday and Wednesday, Fed Chairman Jerome Powell will be testifying before two congressional committees and providing his outlook on the economy. Several board members will also be speaking throughout the week which will provide cumulative insight as to how reserved or swashbuckling officials are on policy going forward. The US Dollar may rise if commentary from the former overwhelms the latter.