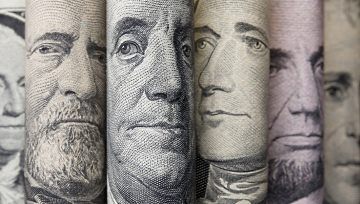 US Dollar May Rise as Worried Markets Search For Safe Harbor

See the latest US Dollar technical and fundamental forecast to find out what will drive prices in Q3!

Financial markets were treated to about as dovish of a Federal Reserve as they could hope for last week. Comments from Chair Powell in biannual Congressional testimony as well as the text of minutes from June’s meeting of the policy-setting FOMC committee appeared to confirm that at least some easing is imminent. The US Dollar dutifully fell alongside bond yields.

The magnitude of the move was tellingly modest however. The Greenback edged down toward the middle of the range it has traced out since late May against a basket of its major counterparts (Euro, Yen, Pound and Aussie Dollar), but nothing more. In fact, the overall uptrend from late-February lows remains conspicuously intact. That’s quite impressive since markets now favor three 25bps rate cuts before year-end.

An obvious question follows: how much more room does USD have to fall? Indeed, it is possible that markets have priced in about as much stimulus as could be reasonably expected, and probably more. Three cuts along with the unwind of the QT balance sheet reduction effort – all before the calendar turns to 2020 – amounts to a lot of accommodation in a hurry. There may not be scope to price in significantly more.

Meanwhile, there seems to be a clear disconnect between the markets’ reaction to the likelihood of monetary policy support and the reasons for it. Investors seem all too happy to celebrate the former without much thought about the latter. Were they to consider that the Fed’s defensive posture reflects an increasingly ominous slowdown in global growth, their rosy disposition might soon sour.

The week ahead brings ample opportunities for a rethink. US retail sales and Chinese GDP data are expected to show slowdown, highlighting the damaging effects of the trade war between the world’s top two economies. Chair Powell is also due to speak again – this time at the Bank of France – and seems likely to sound the alarm anew. The Beige Book survey of regional US growth conditions may also be worrying.

On the geopolitical front, the G7 group of finance ministers will meet to discuss the deteriorating global outlook and the UK will probably say that Brexit-at-all-costs enthusiast Boris Johnson will be its next prime minister. As if that were not enough, a steady stream of second-quarter corporate earnings reports will give the world’s top companies an opportunity to worry aloud about broadening malaise worldwide.

Pondering such things has led to markets to price in an ever-larger Fed rescue effort, which has underpinned sentiment in recent weeks. Once they’ve run out of room to continue, an impetus to de-risk portfolios may begin to take center stage as the dominant driver of market-wide price action. This process is likely to put an outsized premium on liquidity, and on this score the US Dollar is unrivaled.