US Dollar Weekly Forecast: After May Fed Meeting & April NFP, Fed Speakers & April Inflation Due Up 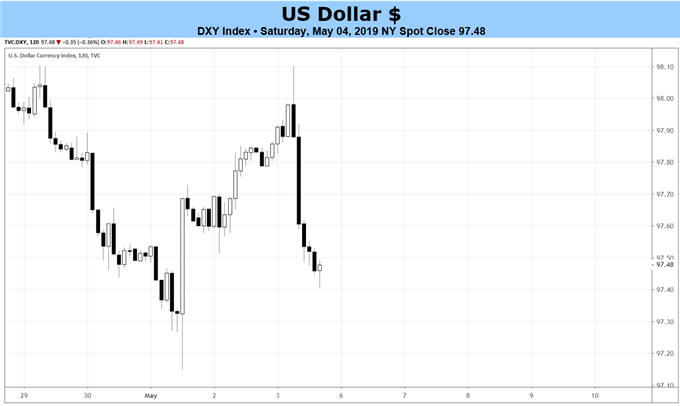 - After the May Fed meeting and the April US jobs report, odds of a 25-bps rate cut in 2019 by the Federal Reserve have fallen to exactly 50%, per Fed funds futures contracts.

- A slew of Fed policymakers will hit the lecture circuit this week, while the only ‘high’ rated data release is the April US inflation report due on Friday;

What appeared to be a strong end to the month of April for the US Dollar (via the DXY Index) faded away into a weak start at the beginning of May. The US Dollar lost ground against all but two of the other major currencies this past week, posting modest gains against the Australian and New Zealand Dollars (AUDUSD -0.34%, NZDUSD -0.23%).

Otherwise, with signs of a potential positive Brexit breakthrough coming late in the week, the British Pound was able to lead the way higher versus the greenback (GBPUSD 1.99%). US Dollar weakness after the April US jobs report also filtered through in preventing a major breakdown in gold prices for the time being.

In Aftermath of May Fed Meeting, 2019 Rate Cut Odds Fall

At the press conference following the May Fed meeting on Wednesday, Fed Chair Jerome Powell said that low inflation was “transitory” and not “persistent.” Market participants have largely interpreted this as a sign that the likelihood of a 25-bps rate cut this year is lower than previously expected. At their peak following the March Fed meeting, rates markets were pricing in a 58% chance of a 25-bps rate cut in September; now, odds of a September cut are only 26%. To this end, Fed funds are only pricing in a coin flip’s chance of a cut in 2019.

Fed Speeches to Watch For

Now that the May Fed meeting is in the rearview mirror, the blackout period for Fed policymakers is over and several will hit the lecture circuit in the week ahead. On Monday, May 6, Philadelphia Fed President Patrick Harker will give a speech on the US economic outlook. On Tuesday, May 7, Dallas Fed President Robert Kaplan will speak at a panel in Beijing, China. On Wednesday, May 8, Fed Governor Lael Brainard will make the opening remarks at the `Fed Listens' event.

The second half of the week is backloaded with Fed speakers as well. On Thursday, May 9, Fed Chair Powell will give the opening remarks at a Fed community development conference. Chicago Fed President Charles Evans will speak at the same event later in the day, as will Governor Brainard on Friday, May 10. Also, on Friday, New York Fed President John Williams will speak at a breakfast event in New York City.

April US Inflation Data Due Friday; Inflation Expectations Have Stabilized

The April US Consumer Price Index on Friday is due to show another small rebound in price pressures, not much of a surprise given the rise in oil prices since the start of 2019. According to Bloomberg News, headline CPI is expected in at 2.1% from 1.9%, and core CPI is due in at 2.1% from 2% (y/y). Overall, the readings are due right at the Federal Reserve’s medium-term target of +2% - supporting Fed Chair Powell’s assessment at the May Fed meeting that low inflation seen earlier this year was “transitory.” 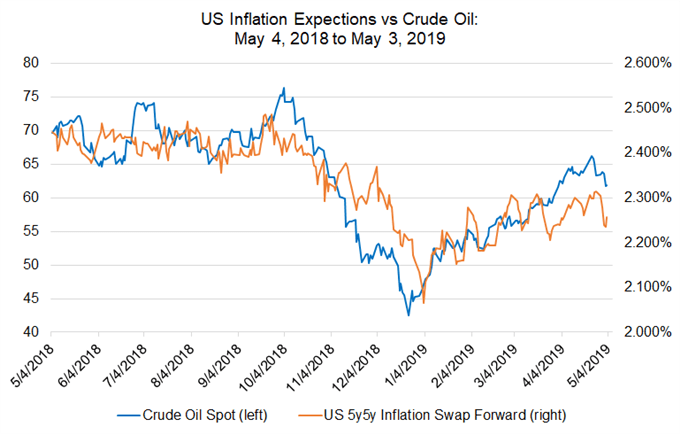 US President Donald Trump ended the week saying that the US-China trade war negotiations were going “very well,” noting that “we’re getting close to a very historic, monumental deal.” While certainly a boost of optimism that investors surely liked to hear, the US president also said in the same breath that “if it doesn’t happen, we’ll be fine too. Maybe even better.”

These comments come on the heels of interim White House Chief of Staff Mick Mulvaney saying on Tuesday, April 30 that the US-China trade war negotiations would be resolved “one way or the other in the next couple weeks.” 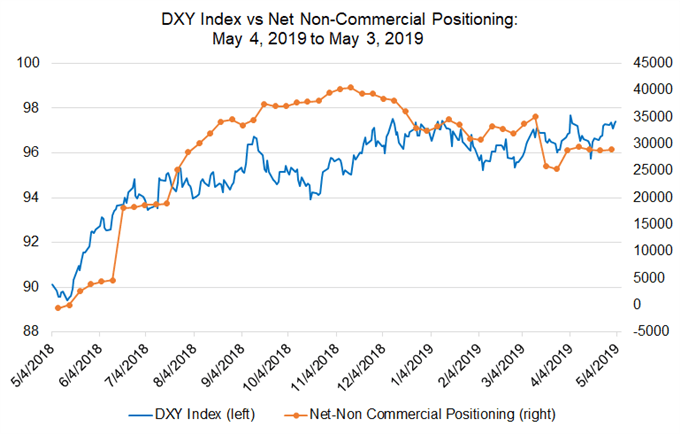