US Dollar Has Scope to Extend Rally on CPI Data, Powell Speech 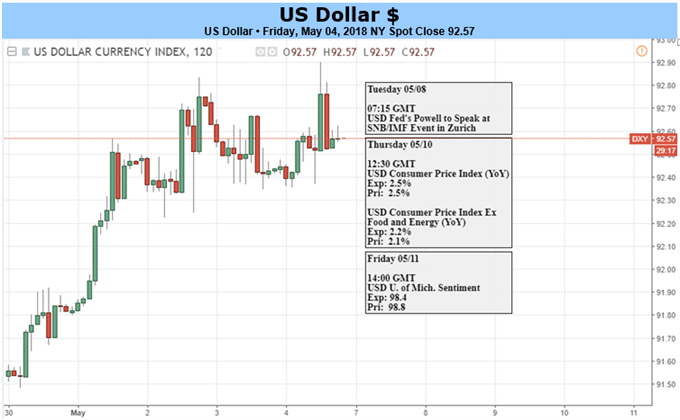 The US Dollar has completed the largest three-week rise in nearly two years, buoyed by swelling Fed rate hike bets. Hawkish comments from a rotating cast of central bank officials – including previously dovish Governor Lael Brainard and Chicago Fed President Charles Evans – were bolstered by an FOMC statement foreshadowing brisk tightening beyond 2018 and data showing inflation is heating up.

The week ahead will keep speculation focused on monetary policy as April’s CPI report comes across the wires against a backdrop of commentary from Fed policymakers. The headline on-year inflation rate is expected to rise to 2.5 percent. The core measure stripping out volatile food and energy prices is seen coming in at 2.2 percent. Both outcomes would mark the highest readings in 14 months.

On the speaking docket, an appearance by Chair Jerome Powell at an SNB/IMF panel takes top billing. He will talk about the influence of monetary policy on global financial conditions, a topic that is all too appropriate as Fed stimulus withdrawal translates into higher borrowing costs worldwide. Six other US central bank officials across the hawkish/dovish spectrum are also due to give policy-themed speeches.

Taken together, this seems likely to translate into further gains for the greenback. Mr Powell will probably signal that the Fed will not be deterred from raising rates by the knock-on effects of doing so beyond US borders. Meanwhile, leading PMI survey data bolsters the case for a pickup in inflation last month and even hints it may surprise on the upside.

From a tactical perspective, it seems tempting to suppose the US currency may be due for something of a corrective pullback after three weeks of breakneck gains. CFTC positioning data reveals large speculators were still fractionally net-short US Dollar Index futures as of May 1. While that is a bit dated, it suggests ample room for rebalancing exposure, giving the greenback room for upside follow-through.